Crutch, Crutch, Goose - a new game with my Mother

You've probably played the game "duck, duck, goose".  You know, the one where you sit in a circle and hope you are the one chosen to run around the group like a maniac.  Then you get to bop someone else on the head and they take their turn.  Such excitement and anticipation in the air.  Or not?

I play a version of this game often.  I sit and meditate. Then BOP, an idea pops into my head and I'm up and running around like a maniac.

oops.....that "bop" wasn't my idea.  But I was off and running, or hopping actually, to get her situated in her new spot.

Being on crutches has slowed me down......a LOT!  This has not exactly been like pulling off a busy highway and viewing the scenic overlook.  It's been more like having to pull off and sit in a garage while your car is fixed.  You have to look much more intensely for the positives in this pause than if you pull over to see the Blue Ridge Mountains on Skyline Drive.

In the midst of all this hustle and bustle of moving my mother, it is so easy to lose sight of the positives.

I had been planning a special picnic lunch for my mother.  Spent most of Friday afternoon making food preparations and creating the perfect scenario in my head.  Early in the week I had promised her that I would take her out for lunch.  I thought that would be a nice change from the institutional food and atmosphere she has had to adjust to.  But now I felt that just wouldn't do.  I realized that what she really needed was a touch of home.  Familiar things that would tie her to the past.  Memories are all she has left and they are fading too. 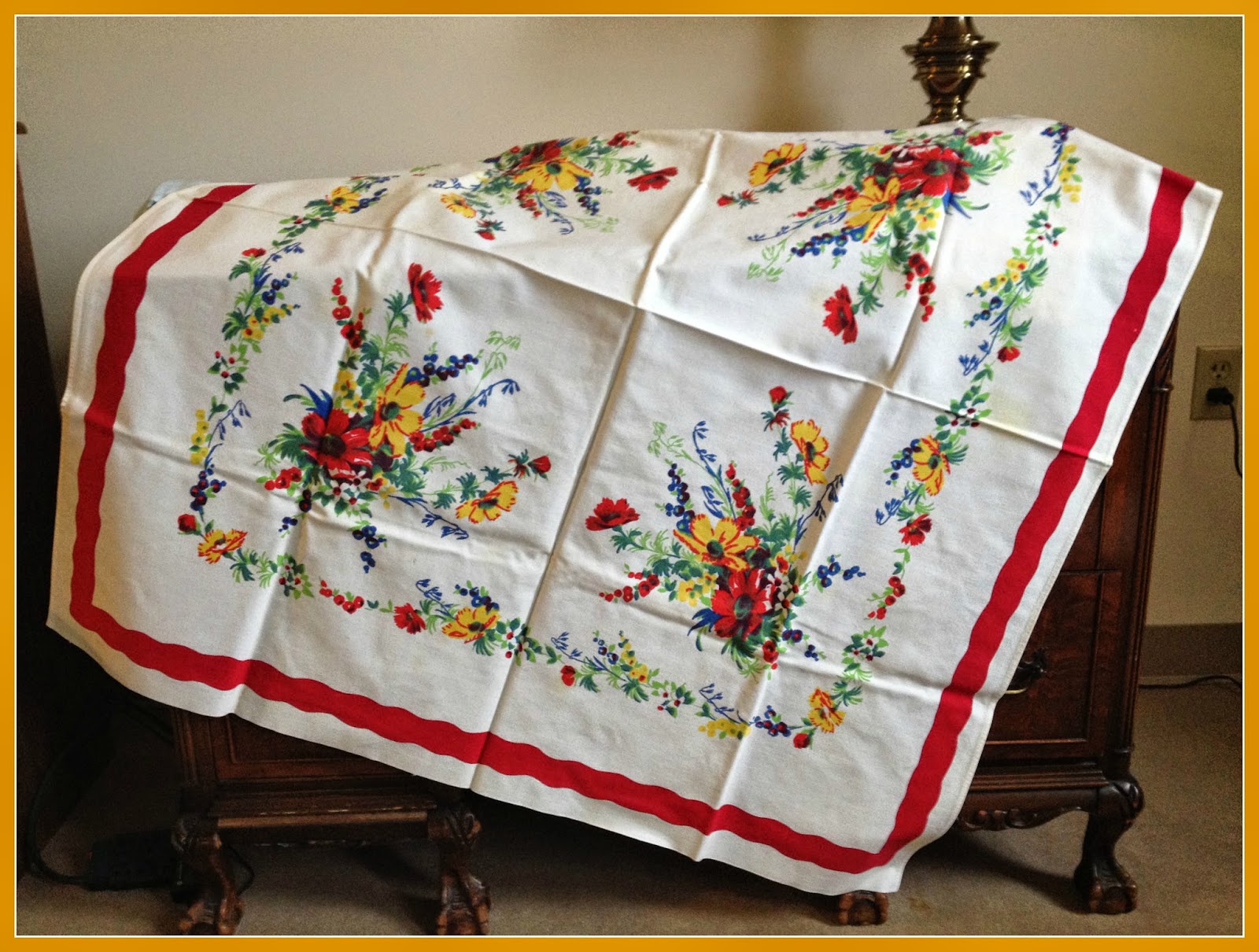 So I started conjuring up this picnic idea in my head.

And then we got a call at 9:00 p.m. Friday night.  She had fallen in her bathroom, hit her head on the tile floor and would be heading to the ER.  We arrived before she did.  You could say she hit her head alright.  She had a massive goose egg on her forehead and I gasped when I saw it, trying not to let her see my reaction.

I held her hand at one point to help her lift her arms for the nurse and saw the skin drape down over her bones like a wet dish rag.  She's only 95 pounds and I'm convinced most of that is just bone.  It was a long night.

She wondered about our lunch plans.  Could we still go through with them?  "Let's just take it one step at a time", I said.

Saturday came and it was sunny, but there was a very blustery wind that came with the sunshine so I wasn't sure we could go to the park as planned.  Plus, I had no idea what kind of shape she'd be in from falling the night before. 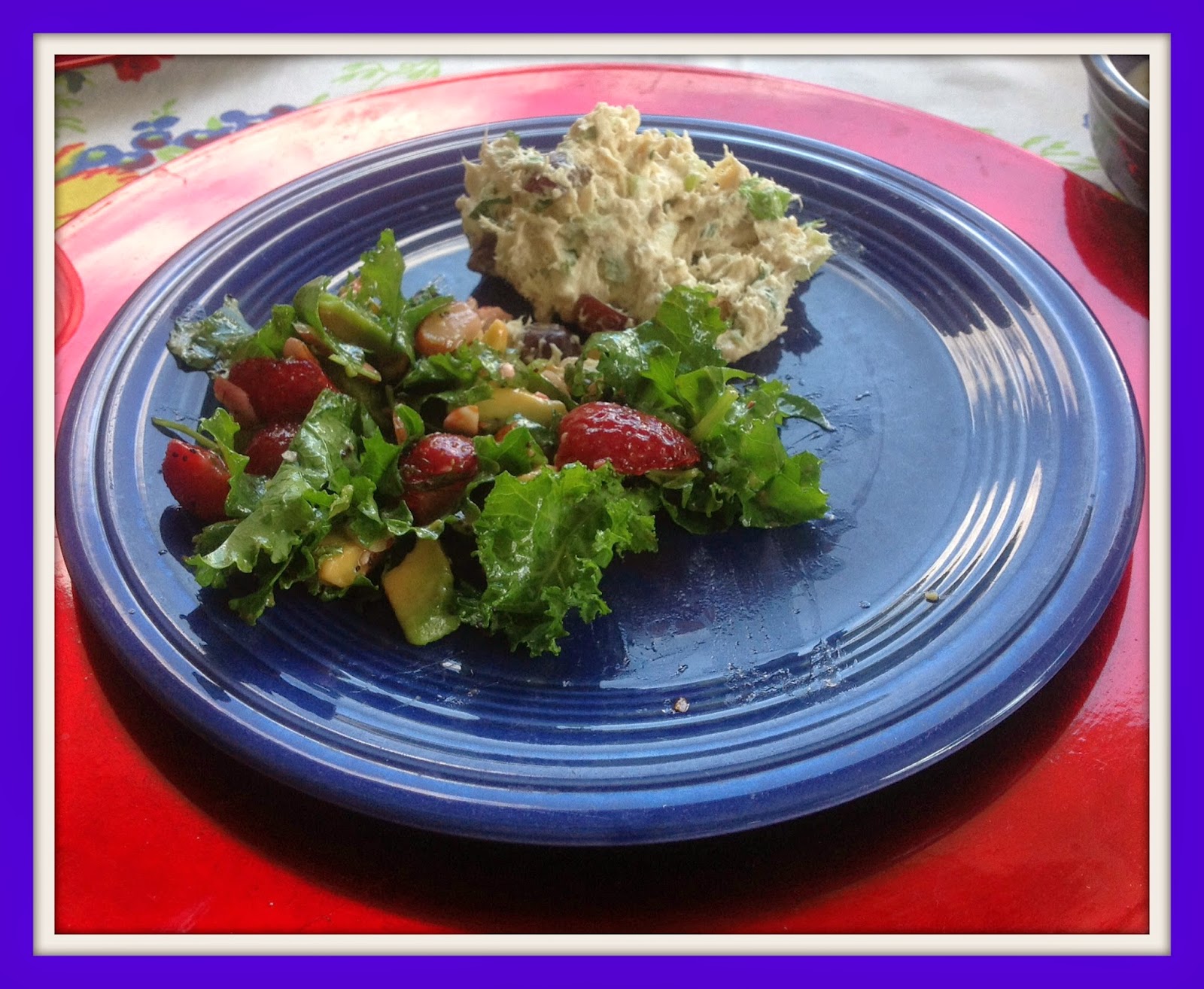 I made the root beer floats ahead of time, put them in the freezer so they'd last in the cooler, packed the blue fiestaware, cheery tablecloth, would she even remember the cloth I wondered, chicken salad, fresh kale salad with fresh strawberries, avocado, almonds, feta cheese and homemade honey-lemon poppy seed dressing and drove the 30 minutes to the home.

A nurse carried all the food in for me.  She suggested a little sunroom at the end of the hall.  My mother wasn't up to going out the nurse thought.

I stepped into her room and gasped again.  I don't have children so I don't know what it's like to watch your child suffer from bruises and ailments, but I do know the feeling of seeing your aging mother becoming more frail by the week and I shivered at the sight of her black and blue face.  A child always has the hope of growing up and getting stronger.  At 91, it's a very different scenario when they are bruised or ailing.  It seems to only weaken them.  You take a deep breath every time the nursing center number registers on your phone.  Is this going to be it you ask yourself?

I could see we had about 2 options.  Let her lay in bed and have the picnic lunch in her room or try to get her up and sit in the sunroom.  She seemed interested in the sunroom so I went to get it ready.

We hobbled out to the room together, she with her frail body clinging to the walker for support and me with my injured ankle and grieving heart.

When we sat down at that table, however, it was as if we entered another world.  She recognized the tablecloth immediately.  We talked of gardening, cooking, where the tablecloth came from, though she doesn't remember, and how she had walked by this sunroom many times never dreaming she would end up here.

I realized as we ate that it was the first time in weeks that we had anything that resembled 'normal' to do together.  It had been weeks focused on parting with her furniture, signing papers, releasing her old room, filling out more papers, getting used to a very small room, new staff and procedures. It had taken its toll on both of us in different ways.  Now, we sat at a table together, sipping root beer floats, eating from her plates (that I inherited from her) on her tablecloth and enjoying home-grown food.

Every time she sipped the root beer float she would say "this is delicious!".  I would remind her that this was the treat she served everyone who came to visit her in her cottage.  She would put scoops of ice cream in a glass and cover it with root beer, then put it in the freezer.  When unexpected visitors came, she would simply remove the glass from the freezer, put a straw in it (the kind that flexes near the top) and serve it with some pretzels. I don't know of anyone who didn't love those root beer floats.  But she has no recollection of this tradition.  I sighed.  How can she not remember that?  It was one of her trademarks.

At one point, we ate in silence and suddenly she slid her hand across the tablecloth.  "This is a connection to the past", she said.  Gulp.  Lump in my throat.  She can't remember the root beer floats but she can remember the tablecloth?  Memory is so unpredictable.

It isn't the most ideal stage of life for her right now and I shed many hidden tears over it.  But on this day, there was no running around in circles like maniacs playing duck, duck, goose.   We just sat and enjoyed memories together.  Me on my crutches and her with her goose egg bump on her head.   It's making lemonade out of lemons they usually say, but we had root beer floats instead.

Thanks to her goose egg bruise and my crutches, we made do in our new situation and created a new game...."crutch, crutch, goose".

With or without the crutches and goose egg - we will do this again!