I didn't see it when I first pulled in to my hotel in Franklin, TN, but I stayed right beside an old graveyard dating back to the 1700 and 1800's.  Apparently there was a little church there that burned down and was relocated, but the graves remain.  It must have been an indication of the odd hours I would keep on this trip.

The graveyard shift: The most ungodly hours of the night when no one should be awake!

I'm home now from TN, but I haven't slept much for 4 nights and I now attribute it to what I call "Nashville adrenaline".  It has been known to give me the power to drive home from TN all night to beat a band of tornadoes (and no - it's not a music band) and on this trip, sing to the heights and depths of the scale even though I'm sleep deprived.  Only problem is, when it stops flowing, I pretty much cease. Got room in the graveyard for me?


I met him on one of my earlier trips to TN and overheard him say that he writes musicals.  My show is not necessarily a musical, but my ears perked up when I heard him tell what he does and I knew I wanted to have more time to glean insight from him.  So on this trip, I arranged to meet him for coffee.  Here are some of his credentials:

"As Producer or Executive Producer, managed the conception, development and production of hundreds of recording and publishing projects for major Christian music record labels and publishing companies resulting in gold and platinum sales awards, and consistent "Top Selling" product across all genres."

Two hours later, I had a wealth of information and advice about all kinds of aspects of the music business, plus a contact name for a woman who could write a script for me for the Christmas show.  She and I met later in the afternoon for an hour and I have hired her to take my story and make it into a professional script.  If you check out her website and see all that she does, you will see it was a miracle for her to be able to meet with me on such short notice.  Not only is she a writer and voice over personality, but she is the mom of 4 children! 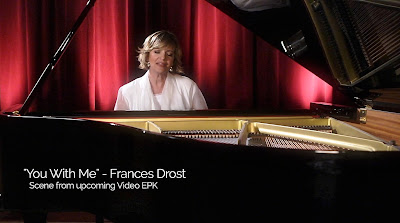 It certainly was a whirlwind of a day, but so many wonderful things just fell right into place. If feels like something special is unfolding.

Posted by Frances Drost at 8:38 PM No comments:

My cell phone rang and I was awakened out of a deep sleep.  I had no idea where I was, why I was in a hotel room or why I was alone.  I checked the number displayed and didn't recognize it so I didn't answer it.
I drove 12 hours yesterday from PA to Nashville, much of it in torrential downpours and by the time I ate supper, checked into my room and ran some errands I was pretty tuckered out so I went to bed and was certainly unaware of life on this terrestrial ball when the phone rang.
Later in the night I went to the bathroom and being much more awake by then, checked my phone.  It was a message from the home where my mother lives.  She had fallen and hit her head so they took her to the ER.  I felt completely helpless.
When I finally fell back to sleep I had a bad dream. I was now back with my mother caring for her and knew that in a few hours I was to be back in TN to begin the final 3 days of recording my CD.  I became very stressed in my dream realizing that I had 12 hours of driving ahead of me and I would never make it.
By the time I woke up, I was exhausted and couldn't get back to sleep.  The morning came early and I did not feel ready for the day.  My throat felt sore from tiredness and the realization that I had lots of singing ahead made we want to pull the covers back over my head and sleep until my voice was strong enough to finish this long awaited project - like how about 2014?
I did my exercise of 1200 rope jumps through the local neighborhood and came back a little more motivated.  After posting the night events on Facebook I was pleasantly encouraged by the number of folks who commented that they would be praying for me.  When I arrived at Phil's studio, I told him I wanted to focus on background vocals today and not do the last main song yet since I hadn't slept well, though I didn't tell him why.
So here it is, the end of the day and we got 6 songs done today and I made it through, voice good and strong.  Many of the harmonies and extra voices you will hear on this project will be the result of today's creative work and ideas between Phil and I.  Of course, I did all the singing - he just gave suggestions and ideas and I had to implement them.  Sometimes we laughed at my sorry tries at some of his ideas, but I usually got it after a few takes.  At one point I told him he should sing them (and I was serious because his voice sounded nice with mine) but he informed me that he is not a singer.  Bah humbug!
As I drove to the studio today I reflected on the fact that I would have never dreamed in a million years that I would get to work with someone like Phil.  He has produced many of my favorites - Carman and Michael Card (for starters).  I remember listening to those guys on the radio as a teenager and being moved by their music.
This is not a dream I have pursued, but yet, slowly over time, by building relationships with people here in town and staying with it even in the midst of frustration, disappointment and setbacks, I am watching something beautiful unfold in my life and I feel as if I had nothing to do with it.
When Eric asked me if I would like Phil Naish to produce the vocals for this project, I couldn't believe it.
My husband and I enjoy the book series by Jeanette Oakes called "Love Comes Softly" and all day the words kept running through my mind...."dreams come softly too".
Tomorrow (Thursday) we will finish background vocals and work on the lead vocal for "You With Me".  Trusting that I will sleep better tonight so I am ready for tomorrow.  This is it!!
I close with a few samples of studio lingo from the day:
we can fly that
really dig that out
onward and upward
here comes the stack
that's happenin'
stack it
I can tell you're thinking about it, not singing it
that is burnin'
P.S.  I don't know why these blogs often don't arrive in your mailbox until a day or so later than when I published it - so sometimes the words today, yesterday and tomorrow don't seem to be in real time.  My apologies.  : (
I called the nurse early this morning and found out that my mother had come home around 3:00 a.m. and was up eating breakfast.  Seems to be ok except for pain in her head and a bruised ankle. My dear sister from Canada called her and was able to comfort her across the miles.  Thanks sister!!
Posted by Frances Drost at 9:06 PM No comments: