After sitting in the Harrisburg airport for 4 hours, we were finally able to be redirected to another city. (My bass player is along too). Bad weather in Detroit, MI shut down the airport and cancelled flights. No one was allowed to fly in or out. We were beginning to wonder if we would ever leave Harrisburg.

Now, sitting in Charlotte, we will soon board the plane for Denver, CO. It's the down side of traveling to gigs. You never know what might happen. I've learned when I have to fly to an event that it always pays to go a day early.

I tried to use some of the time to reflect on the show and how I want to arrange the songs. It's hard to concentrate though. Flying wears me out pretty easily and as soon as there are cancellations and delays, I feel pretty brain-dead....trying to rethink what we will do and how we will get there.

I studied a chart I follow that my live show producer has helped me use over the years and it works really well. It's a kind of map that I follow when I put together a concert. It probably won't make sense to you, but at least you see what helps me in the process. 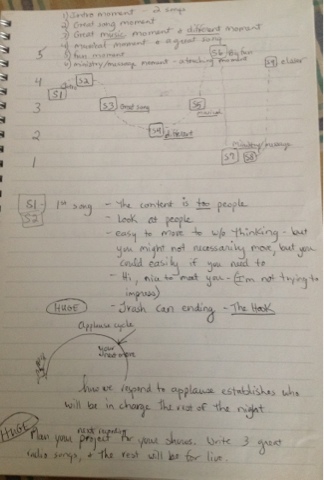 "The Elephant Diet" Day # 93 The Ever Evolving Music

Tonight I received an updated 'rough' version of the song "Night of Miracles".  They've added orchestral parts to what the band did a few weeks ago.  It's really starting to sound full!  It takes some getting used to because it sounds different than it did when the band recorded it.  Strings and timpani make it sound big and lush.  It will be wonderful when it's live on stage!

I promised myself I wouldn't get attached to the initial recording, but it didn't work out too well on my end.  (it never does!). Although I haven't listened to the song since the week they recorded it, I still remember very clearly what it sounded like then.

When we add my vocals, it will sound even more different.  When it's time to mix everything together, they will pull up certain instruments and pull others down (in volume).  It's all part of the process.  You just have to hold steady through it all.

Today I also received a final listing of all the fees to use Live At Rose Lehrman.  I wish I had time to sit down and figure out the total cost of the venue, but I need to finish preparing for my trip to CO tomorrow morning.  It will have to wait.

Posted by Frances Drost at 8:56 PM No comments:

"The Elephant Diet" Day # 92 You're the Inspiration!

I left part of my heart in New York.

It was truly an amazing weekend.

I came home with even greater inspiration to keep writing music and sharing it.

Thank you to all the women in Endwell, New York. You're the inspiration to me today.  Christmas show......here I come.

Next, I head to Estes Park, CO for 5 more days of ministry.

Posted by Frances Drost at 8:14 PM No comments: