Getting hurt, while trying not to get hurt. 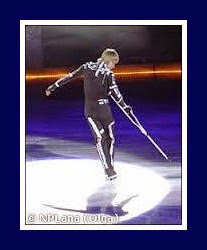 I've made it almost a week using crutches.  I'm a bit envious of the guy in the photo who is skating with a crutch.  Obviously he doesn't really need it.  Maybe he has it just in case he does get hurt.

The very first day I skated with my new pair of skates my coach warned me to be careful of the toe picks.  "They are much sharper than the rental pair you wore".

Wouldn't you know, he was right.  I accidentally dug my toe pick into the ice way too deep and I went face forward down to the ice.  I put my arms out in front of me to stop the fall and I've suffered with muscle pain in my arm because of it ever since that day in January.

I hurt myself while trying NOT to get hurt.  Dah!

Now, here I am on crutches so that my foot can heal.  But the first day I used the crutches I had new pain.   I moaned and groaned that night as I got into bed. My shoulders, neck, back and wrists hurt so bad from the crutches I didn't even notice the ankle problem (my cats were not happy about the metal robot-like legs pounding through the house either).

Have you ever tried so hard to keep yourself from getting hurt that you end up hurting.....yourself?

A long time ago I worked at an office where my boss was emphatic about answering the office phone after the very first ring.  If he heard the phone ring more than once, he was on my case about it.  I was new in town and very young.  I internalized my anxiety day after day over this.  I tried hard to get the phone every time it rang, but sometimes I just couldn't get to it until it was too late, especially if I was taking another call at the time. The second ring signaled a lecture from my boss (he wasn't a dictator...he just knew how he wanted things to be.)

This went on for months until I got so sick in my stomach I ended up in the ER with a stomach ulcer.  I didn't put the two together until years later when this kind of pattern would repeat itself.

I was afraid to speak up and tell him that sometimes it was impossible to do what he demanded.  When my body finally said "I can't take this anymore, I'm hurting", I told a friend of mine who also worked at the office.  She told my boss and from then on he wasn't quite so demanding.

If the current Frances could talk to the 22 year old Frances back then, I would tell her that in stuffing her feelings and fears in order not to get hurt, she would only end up hurting herself more.

I sure miss skating, but I guess there are lessons I can learn even when I'm not on the ice.  This is a good lesson to learn.

How about you?  Are you hurting yourself more by putting up walls so...you....don't get hurt?

Posted by Frances Drost at 8:36 AM No comments: