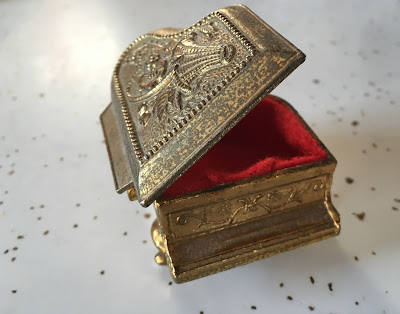 I don't remember where this piano came from but I do know this: I kept it in hopes that someday I'd have a real grand piano. They say that having a picture or some kind of visual of your dream is a good way to keep it alive. So I held on to this little golden piano.

Another piano I will be parting with soon is the first piano I ever played. It was my Mother's first and only piano. She bought it as a young woman with her own money. It will be item # 50 and will be re-located to the home of my Mother's first daughter-in-law.  Nancy married my Mother's first-born son who was killed in a tragic farm accident when he was 26. I'm glad she can keep it.

I have to say that this has been one of the more difficult things to part with on my list, even though I thought I was ready.  Yesterday, I dusted it off to get it ready for it's new home and I was a bit emotional.

I was happy as could be on this piano until one day my piano teacher bought a beautiful Yamaha baby grand and I was no longer content with our Wurlitzer.  From the first moment I laid eyes on that baby, I wanted one. I started praying for one and have kept on asking for over 30 years.

On February 6, 2013, my very own baby grand arrived at my studio. It was my Mother's birthday and we had a frightful snow storm, but the piano movers braved the roads and came anyway.  My prayers had been answered.

Finding the baby grand has a unique backstory.

After suffering from debilitating depression, I decided to see a counselor who encouraged me to do something I loved to do as child. Clearly, that was ice skating. "I want you to go ice skating", she said. That's not what I expected to hear from a professional therapist. But I took her advice to heart - about a year after she suggested it.  I know, I'm a little slow. What good could that possibly really do anyway, I wondered.

I had always loved ice skating, but this time, when I stepped onto the rink during a public skate session, something happened inside me. I could feel a new electricity and an idea was borne. A week later, I was at a rink in Harrisburg, at 6:00 a.m. with a new pair of skates and a determination to learn how to figure skate - for real!

In the following weeks, my husband and I sat down and decided that if I was really going to pursue the dream of doing a big Christmas concert, I should have a grand piano to practice on. He would contact our local bank and start the process of borrowing the money to buy one. We prefer not to borrow money, but for some reason, my husband was open to this idea.

We decided together how much we could afford to borrow and went on with our day. I kept going to the rink as usual and he promised to make arrangements with the bank.

One morning, about two weeks into my skating endeavor, I walked into the rink and my coach began a conversation with me.

"Hey - you're a musician - do you know of anyone who might want a grand piano?"

"What color is it?" (I had my heart set on a shiny black one just like my teacher's.)

"It's shiny black", he said in his adorable British accent.

The next morning after skating, I went to his house and played the piano. It was the perfect size for my little studio. It was everything I had wished for.

As it turns out, he and his family were moving back to England and didn't want to risk moving the piano across the ocean. This was a fact he couldn't tell me at the time when I asked why they were selling it. Due to privacy issues with a new job he was taking in the UK, he couldn't tell me anything.

The good news is, I got a piano and the bad news is, I lost my coach. But that's another story.
He took what we offered and it was such a great deal, we didn't have to borrow the money after all.

Do you have a dream?

Find a small replica or picture of that dream and keep it where you can see it often.

Don't give up on it. Enjoy the journey until it comes true. I know - that seems like an oxymoron when I've been suggesting we let go of things - but there is a time and place for holding on to something that represents a future dream or goal. Trust your instincts when evaluating your "stuff".

From the Wurlitzer, to the Yamaha at my teacher's home, to the golden piano to help me hold on to my dream, to the figure skating....it all ties together. It's the beauty of accumulating something and then being able to let go.

It's a beautiful thing to let go of old things and make room for the new.
Posted by Frances Drost at 10:30 AM 3 comments:


There are 2 yellow dresses hanging in my closet. One used to be full of electrical charge and the other is just a yellow dress.

As I part with "things" I'm learning a lot about why I hold on to stuff. 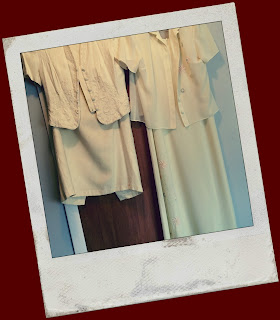 I look at it this way: every item has varying degrees of voltage. Some things are loaded with emotion and memories and are very "alive" with emotional electricity.  Other things have no voltage whatsoever and getting rid of them is as painless as grabbing a wire that has been cut off from the power supply. There is no life left in it and you receive no harm to your physical body by touching it. Therefore, it's no big deal to let it go.

The dress on the left (above) was a very special dress. I felt really pretty in it. Besides the fact that yellow was my Mother's favorite color, I was very slim at the time I purchased it and I wore it for my very first CD release concert "Under The Big Blue Sky". I even had special yellow shoes to match.

To this day, having matching shoes always feels like a luxury item to me because I rarely had special shoes to match an outfit when I was growing up. They were either white for summer or black for winter. When I have a pair of shoes that perfectly matches a special dress, I feel extra lucky.

One day, my Mother and I were driving somewhere in the car together. In what seemed like a random act, she reached over with her index finger and poked my thigh. "You're getting fat", she said. I was horrified. My Mother had never spoken to me about my weight. I don't tell this to condemn her because, honestly, I've said some things in my lifetime that have shocked me and have been just about as horrible, so it's only to give you a sense of how words, formed like seeds, can be planted, take root and grow - no matter who says them!

I don't recall much after that, but I can tell you that a long time later I was getting ready for a concert in Canada at a church and I will never forget putting on my special yellow dress and suddenly realizing that the skirt was very tight in my thigh area. A very horrific feeling came over me. Had I really gained that much weight?

From that day on, the yellow dress became a measuring stick for me. If the skirt was too tight, I sunk into deep shame. I began to be very self-conscious about my weight and how my clothes fit...or didn't fit. I'll never forget the bathroom in the church where I first became aware and overly concerned. I don't even remember much of the concert, just that moment in the bathroom.

I began a slow descent into obsession with weight gain/loss. I began to be afraid that every bite I ate (even healthy) was going to immediately jump from my mouth right to my thighs. I remember reading Karen Carpenter's story and her struggle with an eating disorder. At the time I read about it, I pitied her but could not relate to her. Years later, I found myself struggling with some of the same issues.

A few weeks ago when I spotted that same yellow dress in my closet, I pulled it out and smiled. Ah yes. It was always full of sparks in years gone by. I remembered the apprehension I'd feel when I'd start to put it on - wondering if I could fit into it or not. If I could, I felt relieved. If I couldn't fit into it, I felt ashamed and overwhelmed.

The downward spiral would begin.

I've been on a journey for the past year. I'm learning to eat well, exercise regularly and make healthy choices, for healthy reasons and stick to it! Our bodies benefit from healthy choices no matter the reasoning, but it leaves our soul in poor condition when we are making good choices for the wrong reason. We can become obsessed with how we look (or don't look). And I've been there.

You may or may not remember my post about The CSD Diet.  (The Christmas Show Dress Diet.) The goal I set last year has been reached but in a much healthier way, thanks to much prayer and perseverance. I've lost 20 pounds and been able to keep it off. But it's not over. I have to continue to make good choices - and for the right reasons! That's no small task, as many of us know.

I'm ready to let go of the yellow dress. The sparks that came from that dress no longer exist. I look at the dress and smile and I feel ready to move on. I'm not even going to try it on. It's moving out of my closet and my life!

I know that letting go of stuff is hard. Now I'm starting to see why. It usually goes much deeper than just a fond memory. So here's what I'd suggest if you want to get rid of things but are having a hard time.

1.) Start with easy things - like a hair pin or sock that has a hole in it.

2.) Keep a list of what you are getting rid of. (Keeping a list can make you feel accomplished!)

3.) Ask "why" is this hard to let go of when you get to more difficult things.

4.) Sit down and write out what that item means to you - the memories you have associated with it and you may begin to find it's importance is much deeper than you thought. You may associate that item with a death, a life or the day you lost your job.

5.) If there is a big electrical charge in an item and you just can't let go, it's ok. No judgement! The day will come when you can let go.

Open your life to a new era.
Posted by Frances Drost at 1:22 PM No comments: