Our Own Set of Wheels

His rich baritone voice rose above all the others, partly due to the fact that he was sitting right beside me, but also because he seemed to pick up on the new song quickly. I paused part way through the song and told him he had a beautiful voice. He seemed touched that I noticed.

As we continued singing and conversing together I learned that at one time he had been part of a barbershop quartet. I already knew from our first group songwriting session together that his mother had been a talented piano player and one of his big life regrets was the fact that he didn't take lessons from her when she offered to teach him.


My purpose in connecting with this gathering of elderly people was to gain experience writing songs with groups as a way to build community among various circles of people - whether it be organizations, patients or in this case, residents of a retirement community.

This was my second organization to work with this summer. Though my heart pounds a little bit before I enter the room of complete strangers (knowing I promised we'd write a song as a result of our gathering), I always walk away inspired and take home a deeper appreciation for the path each human being walks. Though each story is so different, there are definite similarities and it's a huge sense of satisfaction to write a song after gatherings such as this one.

There were three recurring themes I heard as these precious elderly people sat and pulled back the curtain for just a moment so I could get a peek into their life.
I felt a twinge of sorrow in my heart as I resonated with them, remembering that those were the things my mother missed the most in her last years on earth.

Many of this group were widows and widowers who had been married well over 50 years. And then we talked about their pets. I loved how one woman talked about her two parakeets; Bruce and Pete. It was obvious they brought her lots of joy. Ah yes, we mourn their departure almost as much as humans. Okay, so maybe there were four recurring themes! 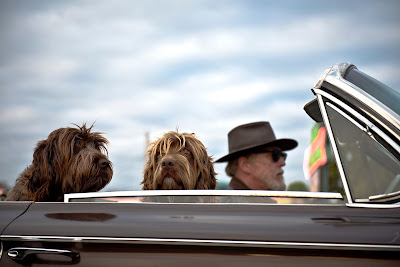 The first week I met with the group, I sat and simply asked a lot of questions and took a lot of notes. I wondered if the group might have some curiosity (and even doubt) about the fact that we were going to come up with a song based on their information. At the end of our first hour together, I assured them that songs are simply lyrics and melodies that come from stories and phrases. If they'd just keep talking, I'd come up with something.

At the end of the hour, one woman said, "This was fun!" But initially, it was hard to get any of them to actually come to the session in the first place. Many seemed apprehensive so I ended up going from room to room with the activity assistant to introduce myself and encourage them to come.

We were only able to gather about seven, but once they agreed to come, I found that if I'd ask the right questions, even the introverts started to talk. Writing a song is a fun and challenging process, but they provided enough keywords and themes that I felt like I had something to work with.

At a recent songwriting workshop I sponsored, Robert Sterling, a hit songwriter, and the guest teacher, told us that all good songwriters are good listeners. I took great comfort in that statement because I knew that I could gather material if I just listen.

Normally, we'd need hours to dig through a thesaurus, dictionaries, and word menu books, but I had to do that later in the privacy of my own studio. A week later I returned(a week later) with a song ready for them to tweak if they wanted. After all, it's about them so I wanted them to have that chance.

I knew I was seeing the realization of my idea and my hopes, all the while touching people at the same time. What more could I want?

I took my guitar and some Rita's Italian ice for the unveiling of the song. Since one of their big hankerings was for food, I wanted to take them a treat. It was such a beautiful day that we ended up sitting out on the porch. Amongst all the activity of the ambulance, transport vehicles and people coming and going from beauty salons and physical therapy, we learned the song together.

As the sun warmed our backs, the collective activity seemed to warm our hearts and Rita's Ice was a great way to conclude the day. It all started with an idea.

First comes thought;
then organization of that thought, into ideas and plans;
then transformation of those plans into reality.
The beginning, as you will observe, is in your imagination.

Do you have some ideas? Can you find some small ways to start testing them? You never know what might unfold if you try.

Due to privacy issues these days, I can't post pictures or video but this is the song we created based on their sentiments. You'll even see what foods they were hungry for. Maybe you can taste them as you read the lyrics.

Maybe you could go visit your loved one who sits in their chair, day after day, wishing for their own set of wheels.

Posted by Frances Drost at 8:26 AM No comments: 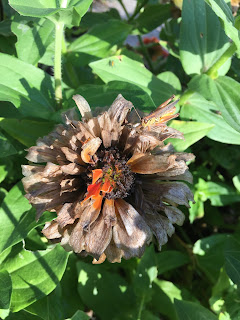 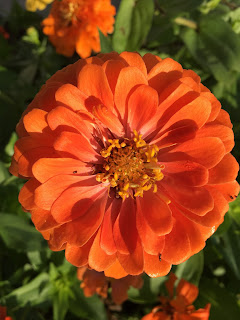 I walked by my zinnias this morning and their brilliance made me stop and ponder their beauty. Next to a brilliant orange flower was a dying bloom, marked by the boring brown color. What a contrast. I paused to take in this ever-inspiring process of growing flowers.

As I continue preparing for this year's Portraits of White concert, I think of how this applies to following our dreams. For instance, I'm currently working on writing a song about snow for this year's concert. I LOVE snow. I know I'm weird, but that's what the title theme song is all about and snow removes the winter blahs, at least for me. I love sharing my heart with the audience each year and finding creative ways to make us all pause for one night and be inspired. Writing a song is one of the ways I go about this.

I'm watching a lot of ideas and lyrics turn brown and "die" because they just aren't there yet. But within the death of those old ideas and lyrics, lie seeds to new ideas and the more I keep "working the soil" in songwriting, the more my little garden of writing grows. You'll get to "pick a bouquet of inspiration" from the music the night of the concert and take it home with you and it will all be because of the cycle of how things grow.

Everything has a process. I would prefer to have only bright orange blossoms growing all the time, but to get those beautiful flowers, they must die to produce new seeds for the next year. At some point in the next few weeks, I'll pluck all the dead blossoms and store them in the basement so they can dry. Within the fading brown petals lie plenty of seeds to grow more next year. In fact, my yard has flourished with zinnias this year thanks to all the seeds I gathered and kept last year.

Maybe you've had to move recently and start new friendships. Perhaps you didn't get the grade you hoped for in class or you've had a sudden crisis of health.

Whatever you are facing these days will often contain brown, "dead-looking" flowers, but within those dry blossoms lie the seeds to a potentially bigger and better garden. As you sort through the seemingly fading blossoms, look for little seeds of hope. They can be planted with the promise of Spring.

At some point, your flowers may end up on someone else's table and bring them complete delight. You may never know what kind of impact your little seeds may have. Just keep tending your garden. There is life in both orange and brown! 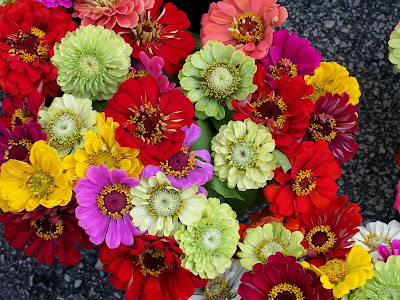 To learn more about this Portraits of White concert, click here.
Posted by Frances Drost at 6:34 AM No comments: