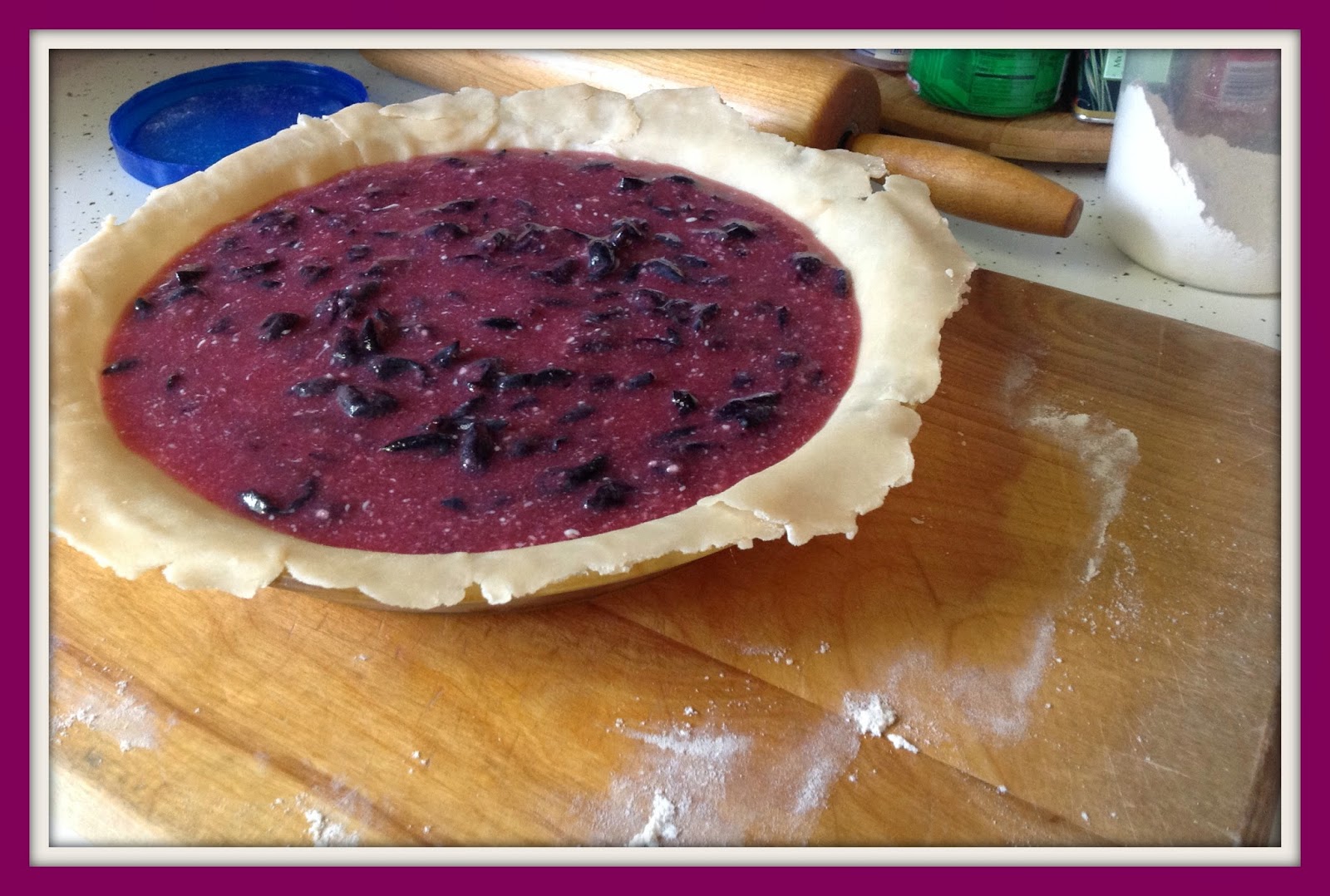 One day after announcing on facebook that I was making a grape pie, I was shocked by how many people had never heard of grape pie and wondered what it was. I smirkishly told them that it was made of grapes.  (hee hee).

My mother was a fabulous pie maker.  My favorite pie of her's was lemon meringue - with more lemon than meringue.

But when she decided to make a grape pie not too many years ago, I was intrigued to try this 'grape' pie she raved about.  Made with concord grapes, it turned out she was right and it has become my favorite fruit pie.

However, I was not prepared for the high price of concord grapes that appeared in our little hometown grocery store around September only.  I realized that this pie was not only amazing, but very costly.

Being the frugal, homegrown farm girl that I am, I decided to plant my own concord grapes so that someday I could have my own grapes for lots of pies.  I had no idea how many years it would take before I had enough grapes to feed a mouse, let alone make a pie.   My husband has tended the vine carefully for years and some years we complained that it wasn't producing and concluded that it was a waste to plant the crazy thing.

Today I harvested not only enough grapes to make 1 pie, but 2 pies and some homemade grape juice.

When I was first married, I was determined to become a good pie maker because my groom really likes fruit pies.  No problem, right?  How hard could it be to make a pie?  My mother did it all the time.

Let's just say that Tom soon learned to stay out of the kitchen when I was making a pie.  Such a gift of love I was working on - complete with thoughts of 'doing him in' with the rolling pin if he didn't leave me alone.  It's not the filling that's hard, it's the flaky pie crust that melts in your mouth that's difficult and that's what I was after.

I would get so angry at the pie dough, the board, the rolling pin and anything else in the room when the dough would stick to the pin, or the board, or worse yet, not be big enough to fit the pie plate.  Did I mention that Tom would pop into the kitchen right in the midst of this tsunami-like flood of emotions and ask a simple "why are you doing it THAT way?".   That's when he learned to stay out of the kitchen.

These days I have a much easier time making the pie because I found a great crust recipe so it's not really an issue anymore.  Of course, the fresh 'hand-picked grape' pie that's in the oven right now gave me a fit as I was rolling out the dough. (I think it knew I was cooking up a blog about it).  You'll see in the pic below that I had to improvise with the top of the crust because there wasn't quite enough dough......proof that the pie knew what I was up to and decided to rebel.  I'll eat it anyway!

I took pictures so you can see that this is not an easy process. But boy oh boy, is it ever worth all this work when I sit down and bite into the sweet-tart taste of the grapes and the pie crust that melts in my mouth. Hallelujah!!!

It will be extra special because they are my own grapes that we've worked hard to nurture all these years.

It will be extra special because I made the pie from the cookbook that my mother gave me at Christmas time in 1984.  On the inside of the book, she wrote:

Christmas 1984
To Frances
From Mother

It will be extra special because I will never make or eat a grape pie again without thinking of my mother who nurtured me so tenderly for many years without seemingly much fruit.  I remember the story of the day she "turned me over to the Lord" because she no longer knew what to do with my habit of back-talking her.

Recently, I learned that the nursing center where she lives feels that she is steadily declining and told me we need to make some end of life decisions.  I realize that time is short and I don't know how long I'll have to be with her. To remind her of the pies she used to make and so many other special things she did for us.  I have observed this decline every time I'm with her so it wasn't news to me and I am preparing my heart.

This grape pie was a lot of work, not just today but over the years.  It's been years in process, but it will be worth the effort.

Anything in life THIS good is not without a lot of effort.