"The Elephant Diet" Day # 115 Singing Your Heart Out

I spent all of today working on vocals for next week's recording.  I had a few moments of tears when I realized that this journey of recording these songs is quickly coming to an end.  You work so hard, takes years to write and then it seems like it's over so fast.  I had to stay focused and not get emotional!

Maybe you're wondering what on earth you practice when you sing? When you are a recording artist, it's all about how you deliver the songs as you are recording.  Every note, every syllable, every vowel and consonant matter.  You are painting a picture with the brush of your heart and voice.

Do you want a song to be loud, soft, gentle or demonstrative?  What words should be emphasized and how? There is so much to work on when you sing.  Keeping a good pitch, while delivering the words with passion is a never ending skill set to work on.  Especially when they are new songs that have never been recorded before.

My producer asked that I send demos of what I'm working on to Phil Naish who will be producing the final vocals and so I recorded my ideas for background vocals and harmonies and did multiple takes of each song - picking the best of each.   This will give us something to start from and talk about when I arrive.  We can listen through what I've done and talk about changes I could make in how I approach the songs.

I am so excited for this opportunity to learn again.  Each recording brings about new experiences and techniques that I can apply to my singing career.  Working with someone new usually adds many more tools to my toolbox.

I am so excited about heading to TN next week to sing my heart out.

Posted by Frances Drost at 7:30 PM No comments:

While I was cutting up rhubarb to make sauce on my back patio, I was practicing the song "Ride in The Sleigh" for next week while listening with my ear buds and soaking up some sun.

I guess that's called multi-tasking.  It's the best way to keep at these vocals and still get my 'home' work done.

My cat seemed to want to help - until my husband told me rhubarb leaves are harmful to animals.  No more of that! 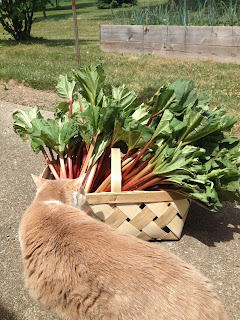 Posted by Frances Drost at 4:32 PM No comments:

When I was buying my dresses for the photo shoot, the sales clerk asked me what it's like to record Christmas music when it's not Christmas.  She wondered if it's difficult.  "Not at all", I said.  "In fact", I continued, "it's actually quite delightful.  Somehow you feel the music in a whole different way.  There are no emotions attached that can sometimes be a distraction at Christmas.  The holidays can be electric with so many triggers and lots of stress, so to sing the music now in the middle of the year is very refreshing.  I can see and hear the music for what it is."

Today I squeezed in a rehearsal of the songs I'll be recording next week.  I practiced as I drove to church and before my meeting tonight.

Yes - I will be recording final vocals next week!  When I got back from Nashville recently, my husband told me he really felt like I shouldn't do the vocals here in my own studio (which is what we were leaning toward doing).  I have the chance to work with a Grammy award winning producer and he didn't think I should pass that up both for the musical experience and the relationship side of working with someone like Phil Naish.

Relationships mean so much in Nashville.  For instance, I get the chance to work with Phil simply because I've worked with another producer and built a relationship with his label over the years.  Because of that relationship, the opportunity to work with someone on Phil's level has come to my door.  Tom didn't think I should pass it up.  So we have now rearranged my schedule and I will spend 3 days in TN next week at Phil's studio recording 8 songs.  I am spending my spare time rehearsing all of these songs as much as I can to prepare.

Yes - it's fun to work on Christmas in June!

Posted by Frances Drost at 6:04 PM No comments: