The conductor (Ed Kee) predicted it would be THE showstopper of the evening. I took his word for it, but since I have never experienced being part of a showstopper, I had no idea what that really meant.
The problem is, there was more than one showstopper on December 12, 2015. The other showstoppers that night were unplanned and unwanted.....at least at first.

In Steven Pressfield's book "The War of Art", he believes that any time we step out to do something daring, we will encounter resistance. Based on my experience, I tend to agree.

The "other" showstoppers started when three of my team members from Nashville, TN were delayed in arriving for the rehearsal due to mechanical issues on their planes. Though they came on different planes, they all experienced mechanical issues.  That seems odd.

* The guitar player's main piece of gear was damaged beyond use by the airlines.
* The live music producer somehow got food poisoning and he never did make it to the rehearsal.

That was only the beginning of the potential showstoppers.

* The night of the concert, one of the orchestra players was delayed due to traffic jams caused by accidents on the roadways.  We waited to begin until he rushed on to the stage and found his seat in the orchestra. 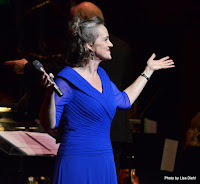 Finally, the venue was full, the lights faded into concert mode and we were off.  Twelve months of planning was about to pay off and I had my hands open, ready to receive the fulfillment of dreaming and working hard. In two hours it would all be over.

The next un-welcomed "showstopper" came right in the middle of the very first song of the concert when I suddenly noticed that my mic went dead and the music seemed harder to hear.  I kept going, thinking that whatever was wrong would be fixed. But next thing I knew, the whole orchestra began a descent into silence - not a beautiful decrescendo - more like a stuttering, choking car going over a cliff.

We paused for a moment until my sarcastic wit kicked into gear. "Goodnight, thank you for coming - it's been great having you here," I said.
Honestly, so much of it is a blur now that I can't remember exactly what I said.  I do know that the crowd laughed in response to my wit and I knew no matter what happened the rest of the evening, we would have a great show! They were with me. No showstopper could stop that.

Suddenly, we were up and running and the rest of the first half went off without any trouble.


Fun Moments
Holy Moments
The second half of the evening started off with the wintery thematic title song, "Portraits of White".
A beautiful jazz arrangement of "Angels We Have Heard on High" featured Doug Cook and Jeffrey Wohlbach and we weren't disappointed.

For nine months, I knew what we were planning to do next and I could hardly wait for the audience to experience the moment.  The West Shore Drum Line was eagerly waiting to come in from the back of Parmer Hall, down the aisles and make their way up on to the stage, joining me for the final verses of "Little Drummer Boy".

The tones and keys of "What If" and "Little Drummer Boy" match perfectly, creating a perfect segue and that's exactly what we planned.  No pause between songs, just one continuous ominous atmosphere. We finished "What If" and I waited patiently in anticipation for what was to come next.

It had gone off without a hitch in rehearsal and I knew the audience would love what we had planned. It got so quiet in the room that I think you could have heard a pin drop. 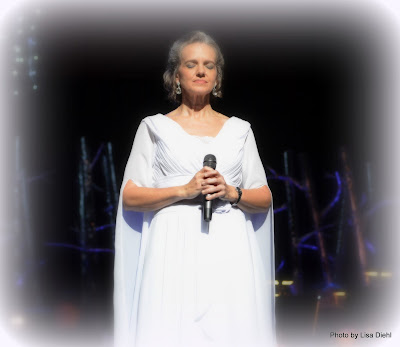 Apparently, when the sound system "quit" in the first song of the night, a breaker had blown. Once the problem was identified, we were off and running and I never thought another thing about the snafu. But one technical problem seems to lead to another and we lost the equipment we needed (without knowing it) to pull off "Little Drummer Boy".

(It's not supposed to take this long to start???  Why aren't we hearing anything? What's wrong?) These were all the things going on in my head as I stood there in perfect peace - on the outside and frankly, thanks to a great team, on the inside too.

It finally occurred to me that though the sound company and venue are in charge of making sure the technical side of everything is working well, it is still my job, in the end, to make sure all my guests are comfortable and at home during the concert.  As soon as I came to my senses and realized there was a problem, I went into hostess mode.

First, I went to find out what was going on so I could address the crowd appropriately and prepare for plan B if necessary. The breaker that blew in the beginning had indeed wrecked our equipment for this special feature and was creating a new showstopper of its own.

Within those long, what could have been uncomfortable moments, emerged a beautiful moment of its own.  We began to sing "Silent Night" together.  I just picked a note and started singing.  The pianist found the note to match me and began to play, followed by Tom Hemby on guitar.

Between each verse I would stop to check in with the sound team and when no progress was made, we'd sing another verse.  It was a dance between holy awe and light-hearted laughter as we waited for what would come next and I was in charge of the dance whether I liked it or not.

By the third verse, I asked the musicians to stop playing and allow the south central PA audience to sing a cappella and it was beautiful.  I began to realize that we had gone from a moment of "what shall we do now?" to a beautiful time of peace and I embraced it.

Then the guitar player began to play the most unusual arrangement of "Silent Night" I've ever heard.  He said he didn't really feel like he was the one playing. In fact, this is what he told me later, "Honestly, I'm just going to give all that credit to the Holy Spirit... as I started playing it was as if it were someone else and not me."


We could all feel the power of what was happening. We were all experiencing a much desired silent night in the midst of a very busy season.

That is at the heart of why I wanted to do a Christmas concert like this in the first place - create a night to come together and laugh, cry, enjoy good music and prepare our hearts for what can be a seasonal roller coaster ride for many people.  I realized it was happening right before my very eyes and I was completely at ease.

When the intended song finally started....and finished, there was such electricity in the room that I will never forget it as long as I have a brain. The only thing more amazing than doing the song after that long unanticipated wait was the response from the audience after the song.

Normally, you can tell when the applause is slowly fading and it's time to move on to the next thing, but it just didn't quit.  I began to wonder if the applause wasn't just about the song, but also about the victory of overcoming the resistance. It was way more than a showstopper by this point in the evening. It had become a battle cry and we won.  We ALL won.  The audience was eagerly waiting and hoping and it seemed that they felt like they too had overcome. Their patience paid off. 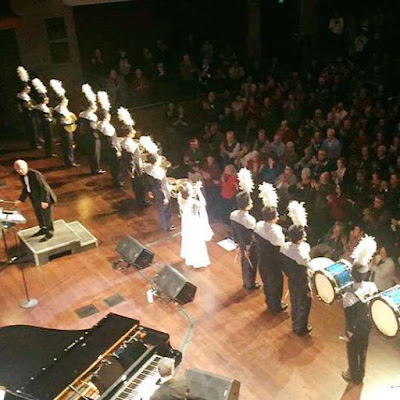 We face so many showstoppers every day and don't even realize it.  Oh sure, there are the obvious ones: terminal illness, unexpected job termination, a sudden accident that rearranges your body and your "normal" life.  But there are little ones too: rejection, doubt, fear, anger.  They might seem small and harmless, but they can blow a breaker and before we know it, we experience bigger problems as a result.  They can be just as serious.

Based on the comments from people after the concert, I may have earned a new title: "Queen of Glitches".  Everyone seems to remember those glitches and how "well I handled them".  I wondered if people remembered anything else about the evening?

But in hind-sight, I see that I only acted out on stage what I have already learned in life.  You see, life is a series of glitches strung together with some beautiful moments in between. How we handle the glitches, determines the power of the showstoppers intended to shut us down.

If we respond with anxiety and fear, it will feed the showstopper - but if we handle them with prayer, peace, music and yes, even laughter - we will be able to stand to our feet in victory and raise our voices in a shout, and the show will go on.

Hear from the Drum Line Director and some of the students here.