The Little Girl In Me

A few years ago, I sat in the counselor's office with tears that freely flowed down my face no matter how hard I tried to hold them back.  I was a mess and was desperate for any help she could give me.

"What kinds of things did you do for fun when you were a little girl?" she asked.

Music was certainly something that filled my life with joy when I was little.  But I have given my life to music as a profession and it can be difficult to go back to something just as a hobby once you've spent years honing the skill to share with audiences.  She encouraged me to just sit and play the piano for fun.

But there was something else I loved to do as a young girl.  I don't even remember how or when I started.

I loved to ice skate.

We had a pond on our farm and I would spend hours out there all by myself skating.  I'd take my tape player out and play music and make up dances on the ice.  It was a place where I could freely express myself to music.  The skates made it easy to twirl and spread my arms like eagles to fly.

It has been years since I have been able to skate.  We don't have a pond where we live now and though the neighbor invited me to skate on his pond, the Pennsylvania winters have not been cold enough long enough to freeze the water.  I set it aside and focused on music and I've enjoyed creating music.

She encouraged me to tap into that little girl again and go ice skating.  I did one day.  I felt so clumsy at first, but something ignited in me and a desire to skate returned.  But we don't live real close to a rink and the skates I have are not very good.  (I took them to a local shop and had them sharpened.  They sharpened them alright.  Cut the concave blade right off. Made it really easy to spin....right out of control).  Winter passed and I forgot about skating.  If I did think about it, I shrugged it off.  Impossible.

Two weeks ago I was unable to sleep one night and began pondering some creative ideas for my show. I'm not sure how it all transpired, maybe it was the Cold Eeze I was taking for my scratchy throat, but somewhere in the middle of the night I got an idea.  I started researching where to buy professional skates on-line.  After reading up on buying skates and finding places to purchase a good pair, I decided that I would take the money someone gave me at Christmas and invest in a new pair of skates.

I prayed as I lay there on my couch that night and asked God to lead me to the right people who could coach me and help me pursue my idea, if possible.  If this idea was from Him, I would need His help.

I discovered there was a free skating lesson at a local rink on the next Saturday afternoon so I decided I would go and get my first lesson.  Something I've never experienced.  I asked the gentleman who was renting skates where I could buy a pro pair.  Turns out he has a shop where you can be fitted for skates.  "Wonderful" I said.

When I went to join the group of mostly children who had shown up for the free lesson, it was the same man who was leading the class.  After giving some instruction and watching us skate, he commented that it looked like I had skated before.  "I've never had a lesson before and I figured it wouldn't hurt to learn to do it right", I replied.

When we finished the lesson, I asked when I could go to his shop and be fitted for a new pair of skates.  "Three o'clock this afternoon is open" he said.  So at 3:00 I arrived at his shop in Harrisburg, PA ready to buy my first pair of good skates.

As I sat in his shop and learned more about skating and all the opportunities there are, I went ahead and shared the idea I had.  He was very encouraging.  When I asked about hiring a private coach, he advised me to come and skate for 2 weeks and then talk about a coach.  The best hours when I could go would have to be the morning hours....6:00 - 9:00 a.m.  He gave me his card and I left.  Turns out his name is Christian Newberry and he is the skating director at the rink.

Since the rink where you can skate (with other serious skaters) is 45 minutes away, I realized that I had to either give up my morning devotional time and put it at a different time of the day (which never seems to work out real well for me) or I could get up earlier and spend that time before I go to the rink. Since I wake up at 4:00 a.m. so many mornings, I decided that I could get up then, have my quiet time and head to the rink.

It has been so invigorating I can't even begin to describe what takes place on the inside of me.

I have always tried to pay attention to the little voice inside me when it begins to whisper desires.  It takes years sometimes, but I have learned that if the desire doesn't go away, there is usually something to it and you should pay attention to it. After all, the scripture says "Delight yourself in the Lord and He will give you the desires of your heart."  As we keep our hearts turned toward Him, I believe He places desires in there and He is capable of bringing them to pass if we diligently seek Him.

I don't know exactly where this will lead but I have a specific goal in mind.  My first set of goals?....

As of today, I have completed those goals.  So I asked Christian yesterday morning if he thought I could pursue my next goal.  "Most adult skaters don't have the balance or speed to do this, but I have been watching you and you have both.  I think you can", he said.  "Your main problem is that you do everything on two feet".  Ah....YEAH!  I laughed.  "I'm still getting used to just skating again", I replied.  (2 hands, 2 ears, 2 eyes, a nose with 2 holes and 2 FEET - makes sense to me.)

I am usually one of the first ones there at the rink every week day which gives me time to skate all alone before the pros come and spin and jump around me.  I watch them with the eye of a hawk.  I learn quickly by watching what they do.  (I can tell you this, the jumps they do on TV sound much louder in real life).  Wow - the force of their landing on the ice is amazing.  I could either let it scare me, discourage me or inspire me.  I have chosen to be inspired by them and it fills my spirit with new vitality and joy.   It is now my new exercise routine.

I am on a new path and it feels so good.  The little girl in me has come to life.  It's as if I have completed Act I and am now getting ready for Act II.  I can't wait to see how this unfolds.  I believe that it will all somehow weave together eventually.

He is now my personal coach.  He is also Britain's National Champion from 1989.  Guess what his wife is?  A music teacher.  How cool is that?

This is how we pursue the things of our soul.  (thank you Tom for giving me freedom to do this!)

Posted by Frances Drost at 11:23 AM No comments:

Up Against A Wall

Any time you step out to do something big, it can be overwhelming.  In fact, you can start to feel as if you are up against a wall and it is closing in on you.

As I think about what this year holds for my music career, I know that one thing I want to accomplish is to follow through on my dream to do a professional christmas show.  So I have come up with a plan and it includes a wall that will help me, not close in on me. 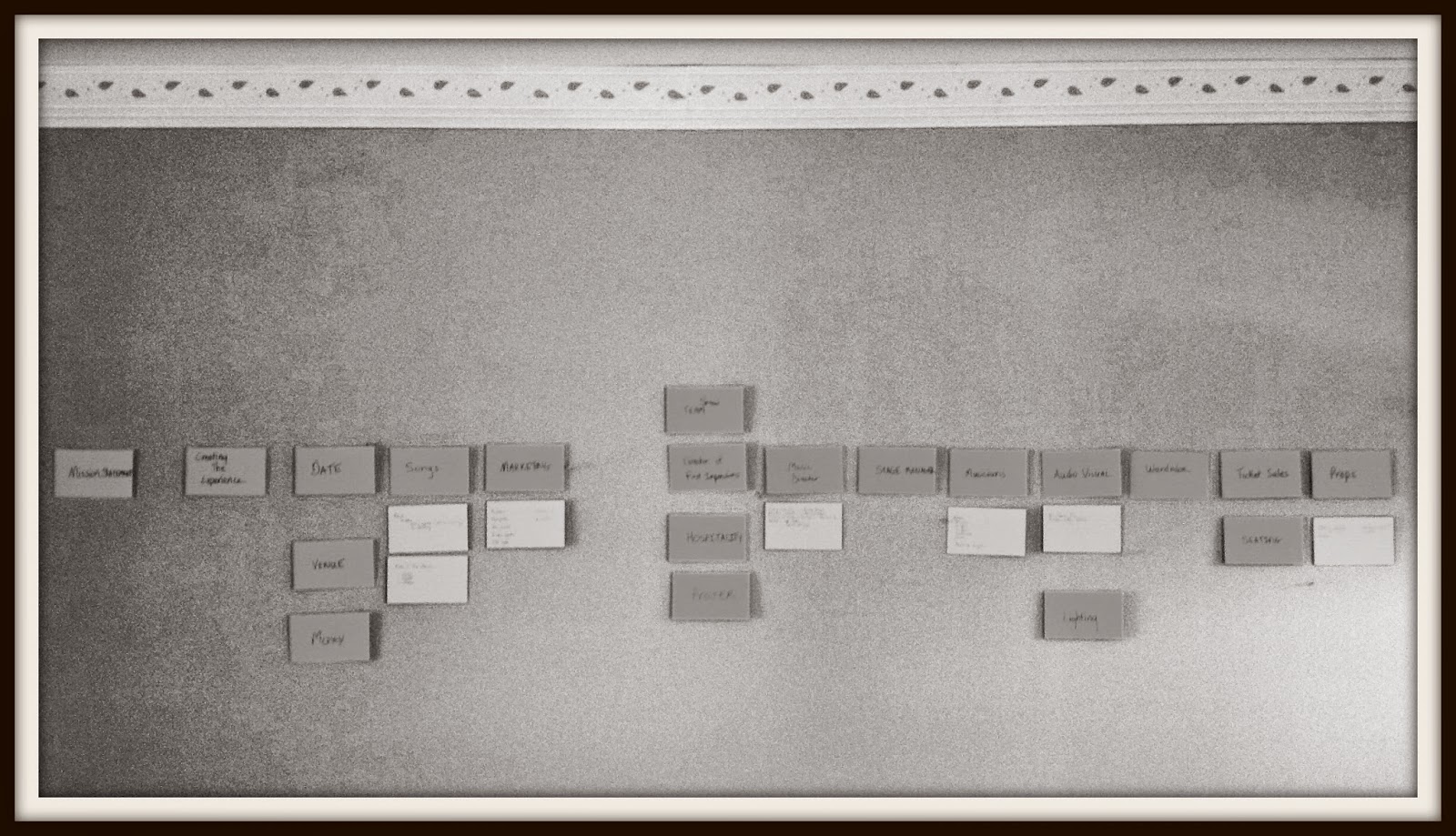 One thing that causes stress in pursuing our dreams is all the details involved and pondering how we will ever accomplish them.  My solution?  I took down everything on one of my studio walls and made up index cards with the titles of all the categories I can think of involved in doing a show.  And it keeps growing.  But that's ok.  Once it is on the wall, it is off my mind.  That frees my mind for more creative thinking.

When something else pops in my head, I make a note and post it on the wall.  I used lined cards so I can make organized notes under each category.  They can be easily moved around in order of importance.  I will add due dates and other information on other colored cards as necessary.

Here are the categories I have so far:

As you can see, this is no small undertaking.  But I love it and I can't wait to see it all come to pass.

Don't stress about your dreams.  Put them up against the wall before they put you up against a wall.

Posted by Frances Drost at 4:52 PM No comments: