Music Music in the Hall, Who's the Finest of Them All?

"You're not using any music so that means you have a gift!", the older gentleman said as he walked by the piano today. We chatted for a few moments and he was on his way. He didn't know that I had a stack of music in my bag. I just happened to be playing without written music when he walked by.


Every week I play the piano in the hospital lobby at PennState Health Milton S. Hershey Medical Center and it's still one of my favorite places to play. I've been doing this 'gig' for years now and my choice of music varies every week—from my own compositions to hymns to classical pieces. Sometimes I follow written music and sometimes I play by ear. I'm grateful that I can do both.

Though I started playing the piano by ear when I was two or three, in sixth grade my mother found a piano teacher for me and I began taking lessons. It seemed like my first piano teacher enjoyed the entertainment as I played by ear, but my second piano teacher wasn't there for entertainment. She soon discovered that I could play a song if she played it for me and if she didn't play it for me first, I struggled to learn it. Once she realized what was happening, I was forced to learn to read. To this day, I still do better if I've heard a song first, but I am SO glad I can read music and I have that teacher to thank!

This past August, Kirstin Myers and I formed a piano/oboe duo we call "Double Keyed" and we're enjoying the musical camaraderie of playing together. Kirstin has been a part of my annual Portraits of White concert every December, and I was excited when we were able to work together beyond the holiday concert. And oh, by the way, we play from written music.

I love the novelty of the oboe and it's inspiring to watch people's reactions. This opportunity would not be possible if my piano teacher had not insisted that I learn to read music. 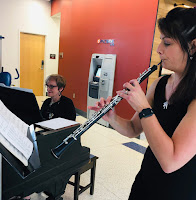 Sometimes I feel as if there can be a subtle air of pride among some musicians who "don't read music" or "never had a lesson". Even the audience "oohs and aahs" when someone announces they are self-taught, especially after they've dazzled us with their abilities.

I admit, it IS a very special thing to be able to sit down without any sheet music and just play. I could sense the "awe" from the gentleman today who commented on the fact that I wasn't using music, but I pondered this all afternoon and decided to encourage people who want to play music not to be afraid or ashamed to get training. I sure wish I had more music education! I'm no Liberace, but there are opportunities that have come my way that would never have happened if I couldn't read music.

It almost feels as absurd as bragging that you are able to create imaginary stories in your head without being able to read. That's creative, but you're missing out on a whole world of possibilities when you can read a book and I believe the same is true when you can read music. You open yourself up to playing great music that others have composed for our enjoyment. Why not learn to play their music?

I suppose the moral of this story is obvious, but just in case it's not, I just want to say that you're not a lesser musician if you have to read something on the written page. You can move people with your music and that's what really matters.

I couldn't do Portraits of White if it weren't for the professional musicians on stage with me. We don't get much rehearsal time and it's crucial that they can play what's on the page with accuracy and expression. They've spent years mastering their instrument and the payoff comes when you hear them play together.

So here's to all the music teachers in the world...thanks for teaching us to read!!

And HERE's a special video with a message from my piano teacher, Donna Houser, who made sure I could read. Now she and her husband bring a group of friends to my December concert every year. I hope I make her proud.