A Festival Of The Soul 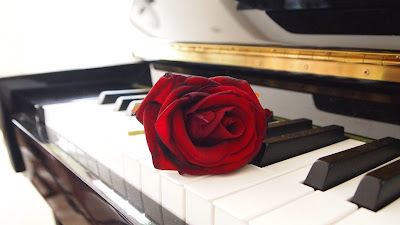 It's Thanksgiving Day and I'm enjoying a day of rest.   Most of us are starting to gear up for the holidays and after the festivities of the day, will rush right into Black Friday.  I have friends who have already decided to put up their christmas tree.

I've been preparing for my Portraits of White concert for so long now that I feel like putting up a tree is too miniscule.  My insides have dug so deep into reflection that the little plastic tree I normally put up seems fake and trite. The makeover of my soul through this process seems to call for a complete makeover of my decorations too....but that won't be happening. I wouldn't even know how to express my soul in the way of ornaments and trees.

My decorations will show up in every note, lyric and thought presented on the night of December 12. It will be a festivity of the soul guised in the garb of music.

I've been practicing for months, but mistakes never disappear it seems. They are like little gophers that pop up out of their hole at the most unexpected times. As soon as I get one conquered, another appears. My mode of retaliation is to "hammer down" - a pun that fits the grand piano well.

It always puzzles me how a person can work so hard and long on something and still have it go awry. Like a skater who's jumped perfectly thousands of times but falls during a competition.

I experienced that recently at one of my concerts. In the midst of a piece I've played countless times, I completely lost my way.  The only payoff in practicing, in that moment, was that I pulled myself together and kept going.  The ability to keep going was my only success in that moment. Or at least it felt like it.

I walked away feeling like a complete failure. One hour of music - lyrics remembered and all, but all I could think about was the 5 seconds of faltering.

I'm reading a book right now that a singer friend recommended.  I knew the instant she told me about it that I needed to read it...and SOON.  It arrived last week. Today I'm reading it and I feel like I've visited a doctor who has been able to prescribe medicine that will relieve my pain and I thought you might like it too.

It doesn't matter if you are a musician or not - the tendency to remember the ONE mistake you made over any successes you had is common to all of us.  The writer tells of a cello student she had who was quick to point out his own mistakes but never mentioned when he did well. He considered any good performance an "accident".

She encouraged him to speak his successes out loud, not just his mistakes.   He went on to tell his teacher, "I guess I feel that way about a lot of stuff in my life. I sort of shrug off all my successes but get preoccupied with possible failures. Pretty dumb, isn't it?"

I stopped right at that paragraph and put my book down. I reflected on the recent "failure" where I lost my way in a song. All I could remember from that night was the 5 seconds of disarray. I gave about an hour concert and everything else went very well.  In fact, there were moments when I felt like I was giving some of the best delivery ever.  But I don't remember those moments now...or at least I didn't until I read of another human being's struggle to remember the successes.

I'm thankful for this reminder to focus in on the good things. The successes, the opportunities, the blessings we have been given. I suppose that's what this day is really all about.