On The Road Home

They say that it can be life-changing to go to another country and serve in some way. I've served at orphanages in Mexico, played music in the Baltic States and enjoyed leading worship in Germany with women gathered from all over the world.

Though some people may have immediate life-changing results by taking such trips, I think my experience has been that the impact comes in a gentle, quiet way. Perhaps the way a seed appears to be sprouting weeks after you planted it and you almost forgot.

I just returned from Thailand where I met people from all over the world who are working with children in desperate need. But the most transforming moment happened at the airport on my way home. When my friend and I arrived at the airport in Chiang Mai to start our long trek home, we discovered a group of our African friends laughing and having a great time at the same departing gate.
To our delight, we found out we were all on the same flight to Bangkok. While we waited to board, they shared funny stories from the conference. For instance, they didn't realize you had to pay for all the snacks in your hotel room and had been enjoying them all week, marveling that they would find a new supply every night, only to discover that they had to pay for everything they ate.

We also heard stories of hardship, of saving for a whole year to be able to attend the conference and having their belongings stolen on the way to the conference.

On and on the stories went. We laughed and cried and ended our time together with prayer, in French (well, the Bishop prayed in French) and I cried as we parted ways.  Something about it touched me deeply. Their walk of faith seems to take them on roads much more difficult than mine.

Last week I was reading in Hebrews 11 - the great faith chapter - and somehow it stirred up those same feelings I had when we parted ways at the airport with our African brothers. Everyone's path is different in the Hebrews passage. Some people suffered greatly and others saw their dreams come true.

I could sense a song brewing. Lately, I've been trying to practice writing by reading a passage, pondering it and then writing a short song about it - all in a very short amount of time. (They say you need to write 100 songs before you write a great one, so I'm working away at my 'hundreds'.) I thought I'd share it with you.


On The Road Home
by Frances Drost


To listen to the song in its raw form, you can watch the video of it on YouTube. Just click the link (or video) below.


Or click here to view song video.
Posted by Frances Drost at 10:54 AM No comments:

I pulled the blankets up over my head. I felt sick down deep in my gut. "Please, don't make me get up", I groaned inwardly. The phone call had not been good news and from all appearances could cost me a lot of money.

What happened to my sparkly ambition for early morning exercise I wondered? Now I just wanted to stay in bed, pull the curtains shut and turn off my phone, my computer, my life. I even went back and re-read my own blog "Stairway to Something Better" posted a few weeks ago to try and give myself some encouragement.

How can one phone call send a person reeling so far down that they wish for someone to just "knock them out" so they can't feel any pain? Please, let the bell ring!!! Someone count to eight and declare the fight OVER.

A "Low Blow" is a punch deemed by the referee to be below the legal level. 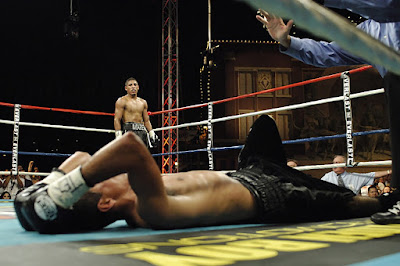 I've felt this way before.

Fifteen years ago we had just celebrated Memorial Day with a picnic together as a family and I noticed my Father seemed especially weak as he tried to lift the left over firewood into the trunk of the car. The next morning, the phone rang intrusively at 7:00 a.m. and it was my mother telling me they were taking him to the ER. He was coughing up blood. Three days later, he passed away with the whole family gathered around his hospital bed. It was a gut-wrenching week.

It took me a long time to get over that dreaded feeling every time the phone rang early in the mornings (and that happens frequently because we are self-employed and customers call early in the morning). I despised the old green phone hanging on the wall.

The "Low Blow" comes when the Doctor discovers a spot on your mammogram and calls you back in to be re-examined.

Or your job has been terminated and they've hired someone younger.

It's a very low blow and it usually comes out of nowhere.

On my recent trip home from Thailand, the last flight was 14 hours, so I watched a few movies to pass the time. (I was too brain dead to accomplish anything significant.) In the movie, "Creed", the former World Heavyweight Champion Rocky Balboa serves as a trainer and mentor to Adonis Johnson, the son of his late friend and former rival Apollo Creed.

I was delightfully surprised at the ending of the movie. It didn't end the way I thought it probably would. You know, typical story of a kid from a rough background who rises to the top, beating all odds, following his dreams and wins - to the shock of everyone in the crowd.

I could connect with this story! Especially after getting the phone call that sent me to my bed looking for solitude and a chance to disconnect from life. Sometimes, I could be really tempted to just throw in the towel and forget this whole "dream" stuff.

It is very hard. And truth is, it only seems to get harder.

Since I usually hope to inspire and motivate through what I write, this time I decided that I would let you know that I have my times of doubt, struggle and tears. I want to turn back and just live a normal life - forget the passions and callings deep inside. Don't even get into the ring to fight. Just sit in the bleachers and watch others fight their way to wherever they think they need to be going.

You see, that's what a "Low Blow" is. It's a punch deemed by the referee to be below the legal level. The difference between life and the boxing ring, however, is that we don't get to determine what the legal level is in life. I wish I could stand up and say, "ok, I've had enough of this, ring the bell, let's move on, leave me alone now". We don't seem to get to do that. I don't mean that we don't ever fight. We just don't seem to get to pick our fights. 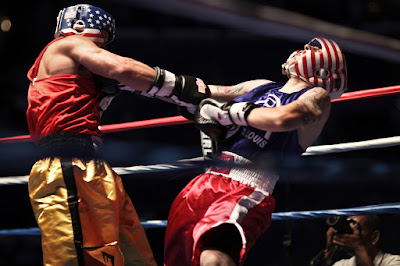 So here's what I gleaned from the movie, even before I knew I'd need it:

1.) Having a team around you that loves and supports you is worth everything!!

Creed received an encouraging note from his Mom, expressing her belief in him right before his fight. He was embraced by his coach and his girlfriend at the end. They had walked in with him and they had walked out with him. The crowd served only as on-lookers and cheerleaders. His inner circle gave him strength. Choose your inner circle carefully. You'll need them.

I am thankful for my husband and my sister, and a circle of friends who support me no matter what.

2.) Sometimes the greatest victory is that you simply make it through to the end of the fight. Not that you take first place.

Posted by Frances Drost at 10:33 AM No comments: