The Family Puzzle. (In Memory of Douglas Paul Crider).

Tom and I used to put puzzles together. I suppose we will again someday when we have lots of free time on our hands. One thing you can always count on, even if some of the pieces somehow disappear, is the picture on the box. It lets you know what the completed puzzle should look like. We would often look at the box to make sure we understood where all the pieces went.

In the case of our family, we've lost a few pieces of our puzzle, but pictures are such a beautiful way to help us remember what the original puzzle was and where the pieces go.


I was only seven years old when another piece of our family puzzle disappeared. In my mind, the picture on the top of this puzzle box is one of our family gathered on the front porch of our farm house in Newville, PA. The Pastor had come to bring us news of the death of my oldest brother, Doug. Another piece missing.

Doug had served a couple of years in Africa and I remember Mother telling me that the day he left on the ship for Africa, she promised herself that she wouldn't cry. Apparently she didn't keep her promise to herself. It must have taken a lot of courage to watch your son board a ship taking him across the water in those days.

Doug was serving in Africa when Nathan drowned and he was not able to be present for Nathan's funeral. Mother said he took that very hard.

But now, Doug had returned home and married a young woman from the community. Nancy Singer joined our family and later gave birth to two young children; Crystal and Kelly. They had settled into a community in northern Pennsylvania, where he worked for a farmer.

One morning, on the farm where he worked, he took a tractor and wagon out into a field to pick up rocks, put them in the wagon and then back up to dump them over a cliff into a dried up river bed below. When they found him, he was crushed beneath the tractor and wagon, at the bottom of the cliff in the river bed. He was so badly bruised that they had a closed casket at his funeral. I know this made the pain even more excruciating for my Mother and for Nancy.

Doug's death came sandwiched in between the tragic death of Nathan (Mother's two year old son) and all the struggles she had been having with meningitis. With a shunt that seemed to malfunction frequently, I cannot fathom receiving news that your first-born son was found dead on a farm in a distant place.

A year later, her father died of an internal bleeding ulcer. She also had another surge of health issues once again related to the malfunction of the shunt in her head. These years are a blur in my mind and as I write this, I realize that there is probably a reason. It's a lot for a little farm family to handle.

July is quite a month in our family history and so were the 1970's.

A few years ago, I was scheduled to do a concert at a little church called Jemison Valley Brethren in Christ in Northern Pennsylvania. A few weeks before the concert, I got an email out of the blue from the secretary of the church. She explained that she was looking forward to the concert and wanted to extend an invitation to breakfast at their farm the morning after my concert. She explained that they live on the farm where my brother died and didn't know if I might appreciate an opportunity to visit the site where Doug died.

I couldn't believe what I was reading. I had no idea (or at least had forgotten) that this little church was located in the community where Doug had lived and died.  We often visited his grave in Chambersburg, Pennsylvania, but I never really knew exactly where he had lived and died.

I was intrigued and immediately took them up on their offer. We had a lovely breakfast together as they tearfully shared the details of that fateful day back in 1973. It was obvious that they still grieved about the whole thing. But our family has never been one to blame other people for these tragedies. I'm so grateful for that legacy! I'm not saying there weren't any struggles, I just never saw any hint of a root of bitterness over these two tragic deaths.

As we drove out through the snowy field and approached the site, I pondered the way our paths had connected without me ever trying to make it happen. My own musical journey was now leading me back to a place that had once again had a major impact on our family—around the theme of death.

When I mentioned this opportunity to my Mother, she replied, in a very sad tone, "I have no desire to see that place." On another day, when I tried to convince her to fly out to New Mexico to see her only living son before she'd be too fragile to travel, she simply said, "I have had enough terror in my life. I don't need anymore." I never brought it up again.

The effects of Doug's death in my own life were softened by the family he left behind. His little girls, Crystal and Kelly, (my nieces) became like little sisters to me, since they are only a few years younger than me. They'd share my double bed with me when they spent time on our farm in the summer. We'd read Winnie the Pooh stories and giggle in our crowded bed. We'd eat home-made ice cream with our own home-grown honey on top. We played house together. I'd play the piano and they would dance in the living room to the music. 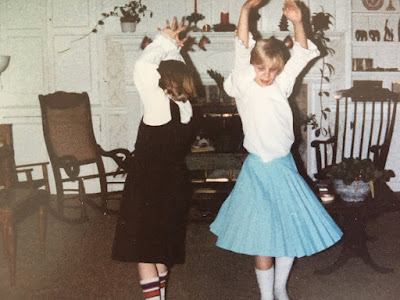 They filled a huge hole in my heart and somehow, their presence made Doug feel like he was still here. I know that they experienced his death much differently—after all, he was their Father!

He would be proud of the family that continues to grow all these years after his death. In fact, he is a Grandfather to eight grandchildren and a Great Grandpa to two darling little boys. Tom and I spend many holidays playing the latest table games with this precious family. It keeps the memory of Doug very alive in my heart. Sometimes, I encounter others who tell me they knew Doug and they begin to tell me stories. I eagerly listen.

I resonated with something Amy Grant wrote in her book, Mosaic;

"I enjoy any passing conversation that starts with, "You don't know me, but I knew your....," because even if you've lived in she same place most of your life, sometimes it takes a total stranger to fill in the missing pieces of your family puzzle."

Posted by Frances Drost at 8:35 AM No comments: