Isn't it funny how you remember certain pieces of clothing so clearly? Like in this poem I wrote for my father, the year following his death (over 18 years ago). I normally don't write poems, but for some reason I wrote a few in my journal that year. It was a therapeutic way of processing my grief in that season.

I woke up early this morning thinking about him, Henry Orville Heisey, because today would be his 90th birthday. I pulled out a journal containing some of those post-death poems and decided to share one with you in honor of him. The songwriter in me wants to do a "re-write", but then it wouldn't be in its original form. The day I wrote it I had simply picked up my pen and started writing until I felt like stopping.

It hangs on the line
my favorite shirt
colors of blue, green and pink
that brought you to life

The blue, cream and gray
of a sweater you wore—
I think now it's Aspen's
I can't be real sure

The ugly gray suit
you used to wear
seemed to have been your favorite
though for it, no one else cared

Everyone else always looks so nice
until it's YOUR daddy
looking cold, dead and still

But then I couldn't wear it
that soft, warm cover
and I guess it doesn't matter
because I can't even remember
what it was that you did have on 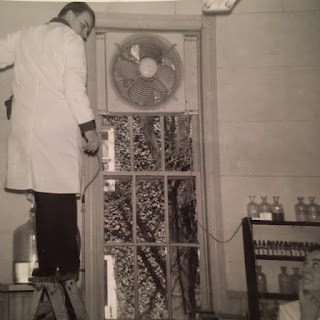 White coat—in those days, he was a chemistry professor.

Posted by Frances Drost at 6:23 AM No comments: