I was both thrilled and surprised by what I discovered in the little Christmas shop in 1999 when my husband was sick and preferring to be alone in our 'get away' room for our anniversary.

I stepped into the shop and my little girl eyes immediately filled with wonder. Ornaments of every size, color and kind were available. Hollywood celebrities, fairy tale figures......you name it - they were there. Everything was dressed up in sparkles and glitter.

I've always been drawn to sparkles. As a young girl, I wished to be the baton twirler in the front of the parade so I could wear the pretty sequin outfits. Another dream was to be a professional figure skater. I was always interested in the beautiful wardrobe they wore. Coming from a conservative home, none of that was possible of course. My backyard and the ice on the farm pond were as far as any parade was going to take me.

Now, years later, in this showy Christmas shop, it was the ornaments that captured my attention.....for a while. Then I began to be turned off by all of it. In fact, I stopped looking at all the pizzaz and began a focused search for something more 'real'.

And then, I spotted just what I was looking for.

The daily update on my project:

I finished a medley of Christmas carols this morning to be sent off to Nashville for orchestration - if we decide to do that. Right now we are on the fence - should it be just piano or add other instruments to it? It will probably depend on the creative juice of the arranger and how the other songs are coming together on the rest of the project. If all the other songs are real 'big' we might end up keeping it simple. I'll be curious to see how it progresses.

Someone emailed me this morning and suggested I give my mailing address where people could send donations toward the big show. I hadn't thought of that but I love the enthusiasm, so since it was suggested, here it is:
611 Greenspring Road
Newville, PA 17241


Posted by Frances Drost at 5:29 PM No comments: 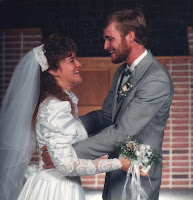 It all started in a little Christmas shop in Ephrata, PA in September of 1999.

My husband and I decided to celebrate our 10th anniversary in a special way and we saved all summer just to take a two-night vacation at the Inn at Donecker's.  We had a jacuzzi in our room and our own special waiter for our own private dining experience with food on the menu we couldn't pronounce. We had a great time laughing at what we thought we might be getting and hoping it was something familiar.  We thought we recognized the word 'angus beef' in the midst of the strong accent of our waiter and decided to order THAT!

Only problem was, I got a very bad stomach virus the day before we left and though it was short-lived, by the time I recovered, Tom and I were out golfing the next morning and he looked at me and said, "I don't feel so hot" and before we could get back to our room, he was already very sick.  He spent the second night of our 'outing' near the toilet.

I needed something to do that night, since he was definitely not in the mood for company.  I headed out to a local Christmas shop to see what I could find.

I was thrilled and then surprised.  (to be continued).


Posted by Frances Drost at 4:54 PM No comments:

By now you are getting very familiar with all that it's going to take to do a CD and a show.  There's certainly more to come, but I think I'd like to take this a little deeper.  Committing to doing this "one bite at a time" or in simpler terms - doing one thing a day toward my goal (and blogging about it) has had a serious impact on me.

I now ponder other goals in my life and know that I can apply this to any of those goals and make progress.

But just like the 'inner dolls' in the russian nesting dolls or 'matryoshka dolls' pictured below, there are many layers to this story.  I want to take you to at least doll # 4.  That's the beauty of this blog.  Only those who read it will get to know places inside of me that others may never know.

One of our pastors recently shared a message using these dolls as an illustration and it was so powerful, I asked if I could use his idea.  I can keep this blog on level # 1 (my public persona) or I can take you to at least # 3 and maybe # 4.  Of course, # 5, represents the places in me that only God really knows.  I think sometimes I tap into # 5, but only as He opens the curtains and lets me peek.  Most of the time it's so deep that I can't get my brain around it.  At times, when I can let go of all earthly worries and details, I can sense that 5th level and that is where my dreams are coming from (in my inexperienced opinion).

Though I will keep you posted on the details as things unfold, right now, I'm going to start sharing the 'why' behind this whole idea of a Christmas show.  Stay tuned.

Today I got an e-mail from the president of the Christian Student Fellowship of HACC.  He would like to set up a meeting between the three of us - himself, the advisor and me.

Posted by Frances Drost at 7:17 PM No comments:

I was hoping Day 100 would be the thrilling announcement.  Keep praying and (a-hem) mark your calendars anyway.  November 23.  Help me pray that it all comes together for that date.

I presented my vision to another group of people Friday night and they all said they'd be there at the show!  So my group of supporters is growing and I can't wait to step up and say THIS IS IT!

I was able to talk with my producer Friday afternoon and the only way he can provide a score of the music we have so far (in the way the conductor would like) is to stop the creative process they are in right now.  They are cranking out the songs - that's for sure.  But not all the songs are completed, so he would have to stop what they are doing and focus on printing.  As you can understand, there is a flow to this thing and I certainly don't want to stop that.

Once all the songs are completed, we will still want to take a step back and make sure there is final cohesiveness and that all songs are as we want them.  It made sense to me.  But the conductor needs to see the score to know what musicians to hire.  If he can have that by the end of May, he assured me that we can get moving on this beast.  I can see his side too.

Somehow, I felt caught between two worlds.  The orchestral world and the Nashville recording world.  I'm the middle person between the producer of the CD and the conductor of the live show orchestra pieces.  It's not an easy place to be, but I am certainly learning to ask a ton of questions.  (I thought I already learned that lesson).

I'm still enjoying this whole process in spite of the twists and turns.  My producer promised that we could have the score by the end of May.  Time to do a dance.  That's progress.

Looks like I am booked to record vocals for the CD on May 23 and the week of June 18 at the studio of Phil Naish.  That was an exciting piece of news!

I got to work with Phil in January on the single I'm doing for Creative Soul Records 15th anniversary project and he was very easy to work with.  Now I get to do the whole project with him.  This put some sunshine in my day in spite of the other delays.  Sounds like I'll also be doing a photo shoot in June.  Yikes!  It's coming together fast.

Posted by Frances Drost at 7:36 PM No comments: