"The Elephant Diet" Day # 35 This Works Both Ways

On Wednesday of this week, some of us who were in Nashville to record for Creative Soul Records gathered at Panera Bread to have lunch and receive some advice and encouragement from president, Eric Copeland.

He reminded us that no matter what we think our plans are, or what we hope them to be, God is ordering our steps.  He originally hoped to be a well known songwriter in town, but now he runs a record label and has impacted the lives of many artists, including me.  He still writes music, but developing artists seems to be his bigger passion these days.  It was nice to gather with other artists and share ministry stories.

But, I was thinking today that I need to take the weekend off from blogging, thinking and cramming so much into so few hours.

Eating the elephant of a big project like making a CD is done little by little, consistently, over time.  Eventually the elephant will disappear.

It works the opposite too.  A little elephant, growing a little bit every day, over time, grows into a giant elephant.  There is a little elephant slowly growing in my house and I need to stop the growth.  Big elephants can do a lot of damage.

It's called balancing working hard at your goals with just taking time to rest and be with your family.

I've been racing full steam ahead for 35 days, proving to myself that I can indeed blog every day and accomplish something every day toward my project.

I don't want my marriage and home to suffer though.  Don't worry - it's not that my marriage is in trouble, but I've been away this week and busy even when I am home for many weeks in a row and I feel like I need to give myself time to rest this weekend and to just be present with my husband.

There will be plenty more waiting to be done on Monday.  See you then!
Posted by Frances Drost at 9:16 PM No comments:

I made it home from TN around midnight in Baltimore. When I got home and crawled in bed, it was 3:00 am. I'm completely done in. Nashville is such a creative place and all my creative juices are stirred when I'm there that I still get adrenaline rushes when I go, even after all these years.

Once the adrenaline wears off, watch out!!!! I can hardly function.

I got up and worked at the church today.

Tonight's blog is basically a picture of David Spencer and I listening to my christmas ideas and talking about a possible Christmas CD. He's young, with 2 small adorable children and sweet wife. I really like what he does with songs. He's high on my list of choices. 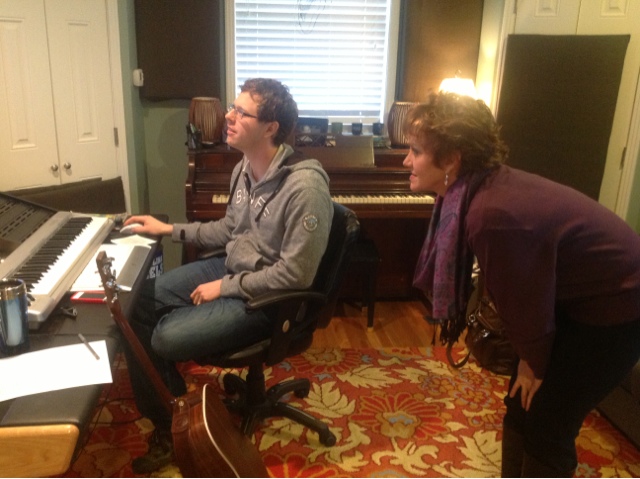 In keeping with my elephant theme, let me just say that yesterday was a circus. I was the trapeze artist flying from one thing to the next (or being thrown)...along with the others of course. I won't bore you with details, but I will let you know that someday my friend and I might want to write a book called 'The Nashville Fiascos'.

Hey, that sounds like a band name.....wheels are turning.

Here is only one example: the photographer we were supposed to have yesterday had to go to Indiana to help his father move into assisted living. This will be the third time I was supposed to work with him and it fell through.

The first time, I brought an entourage of people with me to experience the photo shoot with me....there were 4 of us girls. It was my first time to shop with an image consultant and that is another story. (Just picture Newville PA girl from a very conservative farming community shopping for current trends in Nashville.)

We were supposed to be shooting for the CD cover of 'Inside Things'.

The photographer's Aunt got ill and he had to cancel and go to Indiana to be with his family.

So we rescheduled and I came down to Nashville again. This time the photographer got trapped in a music festival outside of town and the police weren't allowing anyone to leave. He couldn't get out to do the shoot. He recommended someone else, so I went to the address I was given only to find out that he had relocated. No one thought to tell us that.

We made our way to the new location where the recommended replacement photographer was not yet moved in.

We did get the photo session done, but no one except you will probably ever know the fiasco we had.

So yesterday when I got an email saying the photographer had to suddenly go to IN for a family emergency, I proclaimed out loud that I'm just not meant to work with him. He's supposed to be one of the most artistic photographers in town, but I will never know from personal experience.

All that aside, we had a great time mingling with other artists connected with Creative Soul Records, getting our pictures taken and recording our songs with Phil Naish....a very easy guy to work with! I thanked him for all his contribution to christian music over the decades. Steven Curtis Chapman, Michael Card....to name a couple. What an honor to work with him. Like many folks down here, he is extremely gifted and very easy going.

As a young girl, I would listen to music he produced and be moved by it. Now, to work with him while pursuing my own music path is an indescribable experience and one that I am more than grateful for. When you hear the song 'Nobody Sees' you will be hearing the writing of Frances Drost and Darwin Moody (another writer in town) and the amazing arranging and producing of Grammy award winner Phil Naish.

Circus and all, it was a great day.

Some talk of my Christmas project, but too much to write. Maybe I'll save it for a day when I'm back home in Newville missing the excitement of this town and need some encouragement.

I ate breakfast first today. I'm ready for my meeting at 9:00 with another potential producer who isn't even 30 yet and hasn't been at this as long as Phil, but he came highly recommended by Ed Cash and I have already met with him once and like what he does. I've hired him to do one of the Christmas songs. I feel like it will be the best way to know if we are a good fit for each other. A producer basically helps you present your babies to the world for audition. They are a very important part of the journey.

After I meet with him, we will go back and join the circus again for the second day. Even though my other artist friend, Leslie, and I don't need to record today, we will hang out with those who do.

Posted by Frances Drost at 8:24 AM No comments:

Usually I blog at the end of the day, after I have had a chance to eat my elephant bite for the day.

I'm writing this one at 6:15 am Nashville time. I woke up around 3:00 am. Not great for a day filled with photo shoots and recording. The biggest thing that can affect my voice quality real quick is fatigue. But we don't record until 2:00 pm so hopefully I can get more rest before then.

Here's the first turn of the twists and turns:

The president of Creative Soul Records who is leading this project for the next 2 days is suddenly very sick with the flu. The photographer's father is suddenly ill and so he has to go to IN to help move him to assisted living. (I know all about those interruptions). A different photographer has been called in.

As far as I know, Phil, the main producer of the day is ok.

Must be something special about to happen today with all this interference.

Aside from that, I received an orchestral arrangement of Joy To The World in my inbox last night. I was too tired by the time we arrived in Nashville to listen. I prefer to listen to things with fresh ears for the first time so I decided to wait until this morning.

The song has been given wings. I don't know how else to explain it. I just met with the arranger on Friday and he told me it would be 2-3 weeks until he had something done. It's been 3 days.

As I listened to his ideas, tears joined the occasion. To hear the music come alive with an orchestra does something an artist can't even explain.

My next thoughts turned toward you, the listeners. I tried to hear it from your view. Would you experience what I do when I hear it? How do I make sure that you do? Or that you are at least inspired in your own way. That is an art all in itself that I continually study and strive to master. That's where a live show producer comes in. I plan to work with him sometime this Spring.

Here's the twist of the twists and turns:

So now that I've heard what the arranger added to Joy To The World, I think I need to find out what it would cost to record an orchestra here in Nashville. He also sent me a PDF of the score with all the instrument parts written out. Amazing!

I'm at the Charlotte NC airport waiting to board the final flight to Nashville.

Tomorrow I will record with producer Phil Naish.

I'm doing a song along with 14 other artists. Mine is called "Nobody Sees" and comes from the life of David, the psalmist, who learned from experience that nobody but God sometimes sees our good and not so good things and still loves us. It's an invitation to our Father to go ahead and look deep inside of us and heal all that others can't see.

At some point in the next 2 days, I hope to give my Christmas songs to Phil so he can listen to them and give me feedback, along with an estimate of what it would cost to have him produce it.

Exciting days. Gotta run! ....imagine me boarding the plane heading to my favorite place in the world next to my home.

Just arrived and waiting on luggage. 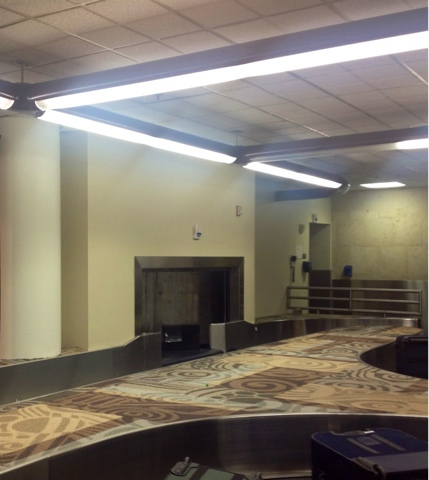 Posted by Frances Drost at 10:28 PM No comments:

Take a look at my newly acquired blog mascot.  It's the first one.

"It even opens ups for inside things", said the reader who gave it to me.  (thank you Janet.)

I LOVE it!  How appropriate that 'inside things' has been my theme for years since the production of the CD called "Inside Things". 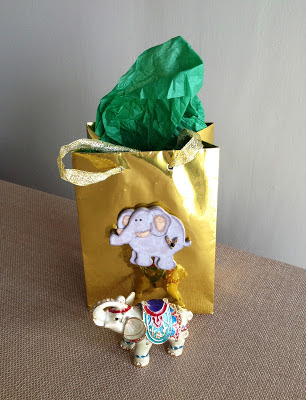 I'm celebrating with my new elephants.  I won't eat these.  They are so cute.
Posted by Frances Drost at 7:46 PM 1 comment: