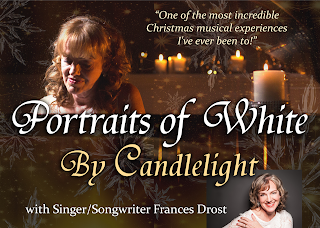 I believe they are!

Coming up with a subtitle for Portraits of White every year is a challenge. Even if ticket buyers never see a subtitle printed anywhere, it helps me focus and serves as a compass for the year's worth of necessary planning.

For example, in 2019, once I decided on the title Portraits of White By Candlelight, I was able to imagine what the show would entail and could structure my ideas around those two words...By Candlelight. 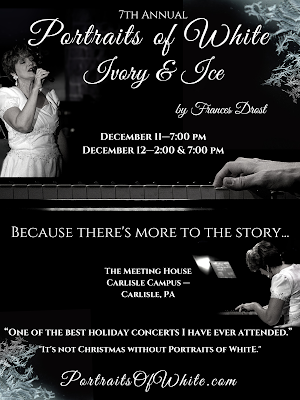 Ivory & Ice - 2020?
I was 95% sure that the subtitle for this year's Portraits of White would be Ivory & Ice. I was 100% determined to find a way to incorporate ice skating into the 2020 production. Since you'll see some footage of me skating in the DVD we've created, I guess you could say it sort of happened. Not quite the same but...

When I was a young girl, I had two loves...playing the piano and ice skating. The show has the potential to bring those two loves together IF I could just figure out a way to have the show at an ice rink. LOL!

You can see a mockup of our idea...a rough draft poster idea for what might have been.

When we landed on the subtitle Ivory & Ice, something else happened. All of my bells and whistles went off inside and I had the strange sensation that it could also be the title of a book...my book perhaps?!

You see, there's a much bigger story behind the show than just the loss of my two brothers and my journey with Christmas. Something powerful happened to me when I took up figure skating the same year that I started the show in 2014. It's as if I stepped into a time machine, was transported back to my childhood to a place of freedom and joy. It had such a profound affect on me that it became the seed for my 2016 album release, Brand New Me.

I don't know if I'll actually ever really finish this book, let alone allow anyone to read it. I don't know if I'd actually end up calling it Ivory & Ice either. I DO know that I sense the need to write the story down, for my own sake. Writing organizes my emotional closet. I think you've heard me say that before. I've heard others say that too.

When COVID hit, I not only wrestled with parting with this year's subtitle idea, but it looked like the show itself wouldn't be happening. In fact, by August, I had given up on the show for 2020.

My team had played around with various subtitle ideas appropriate for everyone's new 2020 "normal" and the moment someone suggested At Home, something inside me said, YES! Then, I got the DVD idea. I poured myself into the Portraits of White At Home idea and I am delighted to have something to offer that everyone can watch while they stay home this year. 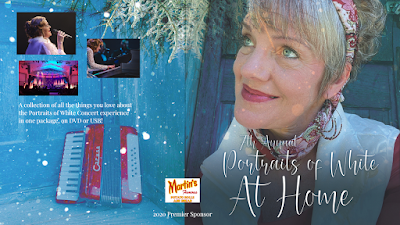 Now, as I start to recover from trying to cram a year's project into about four weeks, I find writing is a great way to rejuvenate the creative side of me and I've picked up my pencil again.

Now that you know all of that...this journal entry will make more sense.  ;-)

"Sunday morning I got up and started writing my book "Ivory and Ice". I feel compelled to write it, now that I have a title and I've finished Robert McKee's book, Story. (Due to the Corona Virus, we didn't have church, though it was online.)

Reading the intro of Richard Paul Evan's book, The Broken Road, has inspired/compelled me for the first time to START! I had inklings before, but it never felt quite right. When we came up with Ivory & Ice for Portraits of White, something clicked inside.

I have pretty much been forced to put Portraits of White on hold with this virus. Trying to confirm a venue just got even more complicated. So it's on hold, which somehow frees up emotional space to write...or start writing my story. I pulled out more journals yesterday to research the one big inciting incident that began to separate mother and me. [A crucial part of my story.] It appears that it happened in 1997, but so far I can't find any writings on it.

But one thing has become clear to me as I read back through my writings. I've sown a ton of seeds of prayer and scripture. It has certainly been my life-line. Yet, I feel as if I don't see much fruit as a result of it. In fact, in the natural, things look more bleak than ever.

Father, do you hear me? Do you hear my cries? Am I totally missing something? If so, what? I keep calling out to you. Show me great and mighty things I haven't known or seen. Please.

Father, I'm asking for an entire, strong, powerful encounter and outpouring of Your divine love."

Order your Portraits of White At Home DVD or USB HERE.

Posted by Frances Drost at 7:36 AM